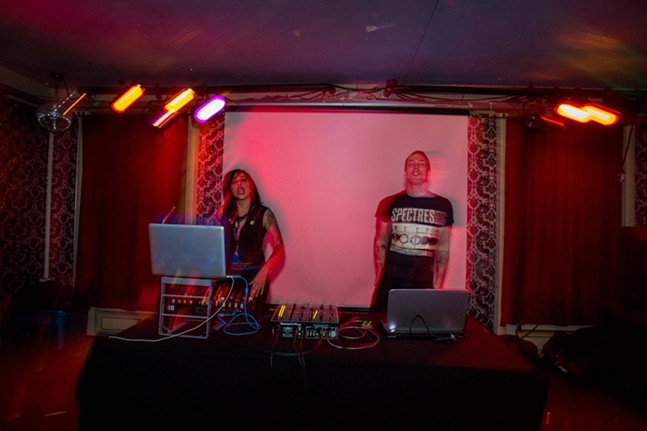 Founding Date/Founder(s): 2017, Erica Moulinier, Aaron Grey
Genre: Post-punk and similar genres like darkwave, dream pop, and peace punk
Artists/Bands Highlights: Shadow Age (Richmond, Va.), Silent Age (Chicago, Ill.) Local highlights include Wisteria, Death Instinct, Silence, Empty Beings, Ky Vöss
Inspiration: "We find it very important to hold onto our DIY and punk roots, so a lot of our inspiration comes from labels during the '80s, like Factory, Statik, Creation, and 4AD, but also contemporaries like Sacred Bones. Factory is a particular favorite, because, like them, we let our bands have complete ownership of the music. We own none of the rights."
Info: playalonerecords.com, currently accepting submissions through the website or info[at]playalonerecords.com*

Erica Moulinier and Aaron Grey, owners and founders of Play Alone Records, are both extremely passionate about post-punk. After years of working with shows and dance nights in the genre — "we have a lot of knowledge on how to book, promote, and tour with bands," says Moulinier — the pair of DIY devotees decided to use utilize those skills and start a record label.

"We felt there weren't enough labels dedicated to post-punk in Pittsburgh and beyond," says Moulinier.

Play Alone primarily concentrates on vinyl record releases, and thanks to Moulinier and Grey's love of DIY, offers its artists "a little bit of everything," including record mastering and production, streaming service placement, public relations, accounting, and business management, among others.

"Record labels still hold value because it's hard for musicians to know all the nuances of releasing music and getting featured by blogs and on streaming apps," says Moulinier. "We want the musicians on our label to be able to focus on their music versus release dates and promotion."

That's because having the opportunity to share an artist's music with others, watching them perform, and falling in love with their work is the best part of running Play Alone Records for Moulinier and Grey.

"I hope folks continue to collect records because vinyl is timeless and there are so many great independent artists around the world that want to share their art with you," says Moulinier. "We are a DIY ethosed entity, and we encourage others to start their own bands, labels, and artistic pursuits."

In addition to running the label, Moulinier and Grey host Second Skin, an underground '80s dance night at brillobox, and Moulinier, along with Skull Records owner, Dusty Hanna, are the brains behind Pittburgh's annual punk festival Skull Fest.

*Play Alone looks for acts that "sound not only great recorded, but also sound tight live, with something special in their performance."