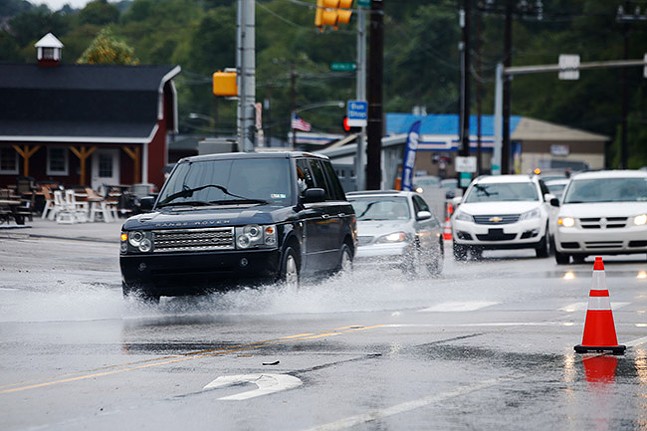 CP photo: Jared Wickerham
Vehicles during flooding on Route 51 in the South Hills
Last year was the third wettest year on record in Pittsburgh history. More than 52 inches of precipitation fell over Southwestern Pennsylvania. This was only the fourth time in recorded history, in well over 100 years, that Pittsburgh received that much rain and snow.

One of the other times was last year, which was the region’s wettest in modern history. That makes the last two years the first time in Pittsburgh history that more than 50 inches of precipitation fell in back-to-back years. Had Hurricane Ivan not hit Pittsburgh in 2004, which dropped almost 6 inches of rain in one day, 2019 would have been the second wettest year on record.

It’s safe to say Pittsburgh is getting wetter and it is happening pretty rapidly.

After the latest #rain -- It's now the 3rd-wettest year on record in #Pittsburgh. #PAwx pic.twitter.com/vp9bXDMovu


A climate professor at Carnegie Mellon University says the diagnosis for all the wet weather is fairly obvious: climate change.

“It is generally true that for climate change ‘wetter places will get wetter, dryer places will get drier,’” wrote CMU professor Neil Donahue in an email to Pittsburgh City Paper. “This is pretty straightforward because when it is hotter there is more evaporation of water but to balance that there is also more precipitation. … So, much of the U.S. east of the Mississippi [River] will get wetter, much of the west will get drier.”

Donahue says that it does get harder to determine climate change’s direct effect on specific regions like Pittsburgh because shifting weather patterns can come into play, but overall the eastern half of the U.S. is going to get wetter as the climate continues to warm.

Where judging the effects of climate change gets trickier, according to Donahue, is linking it directly to extreme weather events like Hurricane Sandy of 2012. While some might not want to blame climate change for these events, Donahue doesn’t think people should outright reject a link between the two.

“It is a cop-out to just say ‘no, that is weather and variability, you can not attribute any given extreme event to climate change,’ but it is also in part true,” wrote Donahue. “However, there is a growing field of analysis of extreme events that puts a rigorous statistical analysis to these things, and … we see many highly unusual things happening in bunches, and many of these bunches ARE probably indicative of climate change.”

Regardless of what is causing this, there are still real issues to address with the increase volume of precipitation. As CP reported in 2018, our municipal storm water systems will be pushed to the test, and will often fail, floods will become more common in low lying areas, and landslides will become more frequent.

Rainy weather recently caused a landslide in Moon Township that has closed down a section of Route 51. The Pittsburgh Post-Gazette reported the section of route 51 won’t be reopened until after the weekend, because of forecasted rain over the next two days.