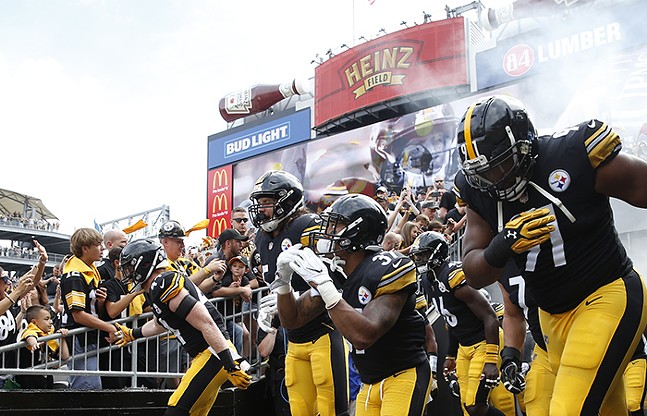 CP Photo: Jared Wickerham
The Pittsburgh Steelers at Heinz Field, now known as Acrisure Stadium
Pittsburgh sports fans woke up today to the news that the Steelers football stadium Heinz Field would be renamed. Since then, residents have taken to social media to make their voices heard, often with jokes. One local restaurant chain went a step further by roasting the decision with a new contest where the winners would get a year of free sandwiches.

As announced in a Steelers press release, Heinz Field will henceforth be known as Acrisure Stadium, after an insurance company backed by Thomas Tull, the Pittsburgh-based billionaire who formerly served as CEO of the Legendary Pictures film production company. Acrisure will immediately take over the naming rights to the North Side stadium, starting with the 2022 season. The stadium had been named Heinz Field since it opened in 2001.

The change left many scratching their heads over why the stadium was not named after a local company like Heinz, as opposed to being named after an entity with only a tenuous connection to Pittsburgh.

"Eat 'n' Park's Whale of a Cod Stadium, in dreams you're mine all the time," reads one tweet by user @reillycoyooote, referring to the famous fish sandwich at the Pittsburgh region diner chain.


Eat 'n' Park's Whale of a Cod Stadium, in dreams you're mine all the time

Local celebrity Pittsburgh Dad references the long-gone Hill's department store, while user @itsaZoob shouted out the Garfield's Nightmare ride at Kennywood Amusement Park, which was recently changed back to the Old Mill.

"Okay, this is getting out of hand," reads one tweet by @FishWithRabies complete with an image of someone holding a ketchup bottle with the Heinz label replaced with one featuring the Acrisure logo.


Okay, this is getting out of hand. pic.twitter.com/bQHnt7oTYa

Some local companies have reacted with either defiance or giveaways. The Pittsburgh Clothing Company tweeted "Sorry Acrisure, but nobody is going to call it that..." with an image of a T-shirt reading "It's Still Heinz Field To Me." (Apparel featuring the sentiment is now available to purchase on the Pittsburgh Clothing Company website, by the way.)

But the famous Pittsburgh sandwich chain Primanti Brothers really took the cake with the launch of a contest offering to "purchase the naming rights" of any basement, fan cave, porch, or deck belonging to area Steelers fans. According to a press release, the restaurant will award 10 fans from around the region with custom Primanti Bros. signage for their home and free sandwiches for a year.

“Listen, if you’ve got a room in your house that looks like the Strip on a Saturday in September – there’s a pretty good chance we want the naming rights,” says Adam Golomb, "chief of football operations" for Primanti Bros.


We want the naming rights to YOUR basement, fan cave, deck - whatever. We’re paying 10 fans with a YEAR’S SUPPLY of FREE SANDWICHES to let us give you an authentically named place to catch a game.

Those interested in entering their Steelers shrine should submit a photo of their space at primantibros.com/fancave. The deadline for submission is Fri., July 15 and winners will be selected and announced on Primanti's social media on Mon., July 18.


The contest not only rewards fans but serves as a little dig at the people behind renaming the stadium.

“When we learned that the team had rejected our offer of unlimited pastrami in exchange for the rights to the name Primanti Bros. Field, we determined the next best thing was to give fans the opportunity to watch sports in an authentically named hometown venue – their own,” says Golomb. “If you can’t be at the game – watching it in your own ‘Official Primanti Bros. Basement’ while eating free sandwiches isn’t so bad."