“I felt it was really important to have a soundtrack to how people were feeling at the time.” 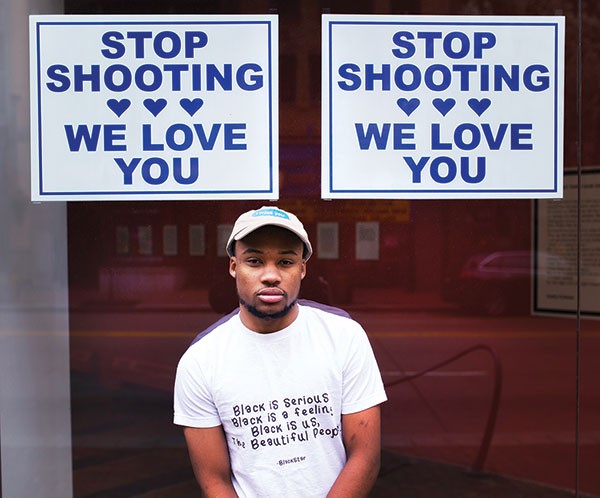 The Black Lives Matter movement weighs heavily on Driving While Black, the debut album of local hip-hop artist Jordan Montgomery. Some of the references are subtle, and some are direct, like the inclusion of news clips about Sandra Bland and Tamir Rice at the album’s end. While the origins of the album predate the movement, Montgomery says that as Black Lives Matter grew, he felt compelled to focus more on what it means to be young and black in America in 2016.

“I felt it was really important to have a soundtrack to how people were feeling at the time,” says Montgomery. “Each song represents hope, it represents anger and frustration, but also coming from a young person’s perspective.”

The eight songs on Driving While Black, released in February on Montgomery’s 21st birthday, showcase some razor-sharp storytelling, politically minded and not. “This World” — produced by DJ Thermos — is a good place to start. It’s a slow-moving, sample-heavy soul song that builds on a Hubert Laws line for a long intro before Montgomery enters, cutting and funny with expert delivery. At one point, he threatens to pee on Bill O’Reilly’s house and rip up the Confederate flags of Kenny Chesney fans, a lyric that might resonate with Pittsburghers.

Montgomery himself is a life-long Pittsburgher, aside from a brief but significant semester living in Chicago after high school, where Montgomery says he was able to meet with and get advice from the prominent producer No ID. His advice: Work on composing complete songs, instead of just good verses strung together. The lesson stuck.

In the time since his homecoming, Montgomery has worked with the local artist collective 1Hood Media — whose members provided many of the beats and featured verses for Driving While Black. These days, Montgomery is focused on improving as a songwriter, pushing his debut and re-investing in his hometown community through 1Hood Media.

“I’ve just been spending a lot of my time since I’ve been back figuring out how to make Pittsburgh an even better place than it already is,” says Jordan. “I don’t think I could ever really leave Pittsburgh just because there’s so much I want to do here.”