“It allowed me to touch on topics that I don’t normally address.” 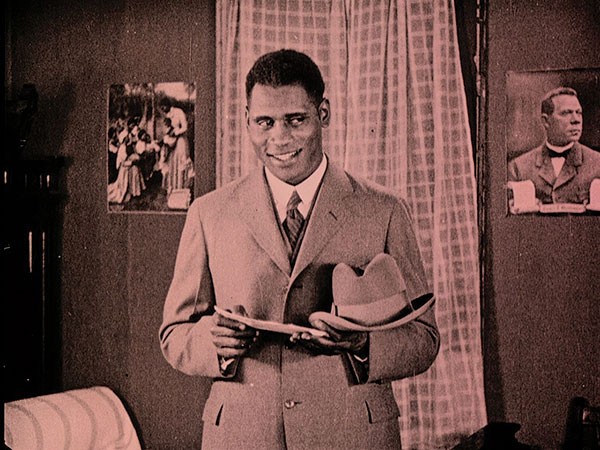 Paul Robeson, in Body and Soul

Black-cinema historian Joseph Kennedy IV will introduce the film. Doors at 7 p.m.; introduction at 8 p.m. followed by screening. Fri., June 17. Hollywood. $15 ($25 VIP balcony seats include poster, popcorn and beverages); $10 students/kids
This Friday, at the Hollywood Theater in Dormont, patrons can catch the premiere of a unique mash-up entertainment event than spans nearly a century: a screening of the 1925 silent film Body and Soul, with original hip-hop accompaniment provided live by Pittsburgh-based performer Jasiri X.

The feature-length melodrama was directed by Oscar Micheaux, the first major African-American film director, with a black cast. Set in a small Georgia town, it tells of a charismatic but unscrupulous preacher who abuses the trust of the community to steal, scheme and rape. Paul Robeson makes his screen debut, portraying both the corrupt preacher and his decent twin brother.

Body and Soul is a sharp critique of how trusted institutions can facilitate the exploitation of the people they claim to protect. The dramatic conceit — the villain isn’t an actual preacher, but an escaped convict posing as one — technically absolves the film of broader accusations, but audiences can read between the lines. (Likewise, the film’s “happy” ending is clearly designed to be ignored.) One barb finds Micheaux cutting between a hand proffering money to the donation basket and other hands doing domestic work and picking cotton.

The strong content surprised Jasiri X, who prior to collaborating with the Hollywood to undertake a “hip-hop-scored silent,” hadn’t seen the film. By phone from Chicago, he recalls: “We watched it together as a production team, and we were like, ‘Yo, wow, what the hell?’ I had this idea that it was 1925, and was going to maybe deal with issues black people were facing back then. I had no idea that it was gonna be the type of movie that it is. But it definitely made it more interesting to write to.”

For the film, Jasiri, along with Idasa Tariq, livefromthecity and Dejah Monea, wrote 10 new songs. “We were able to touch on subjects that I normally wouldn’t cover, [like] corrupt religion [and] relationships. … What I didn’t want to do was make a rap about what was happening in a scene, but to capture the emotion of that scene. … It also has a gospel tinge to it since a lot of [the story] takes place in the church.”

Jasiri says they originally considered using musical samples from the 1920s, but opted for “current hip-shop-style production — not ’90s, not 2000s, but right now. So I feel that’s even more of a catch for a younger audience.”

The evening is a rare opportunity to see a great silent film, and have it presented with a contemporary musical accompaniment. Jasiri hopes the experience proves provocative and enlightening for all: “Some people are going come in to see the movie and get hip hop, and some people are going to come in for hip hop and get the movie. It will be a very unique experience — put it that way.”

Madeline's Madeline is an experimental ride through art, illness, and control