“You can’t tell somebody, ‘Don’t be bad, just be good.’ You have to show them the steps, show them how you know.” 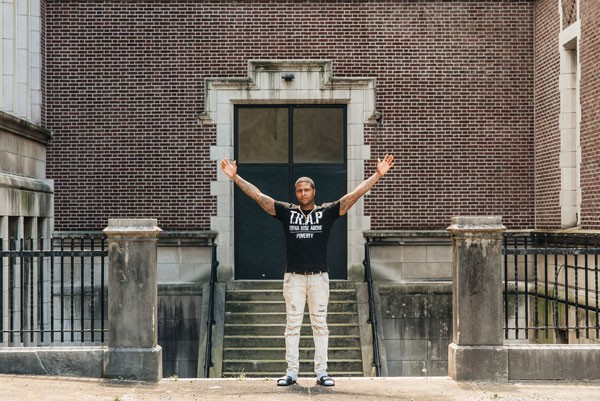 There’s a good chance you’ve never heard of Joseph Barnett, of Wilkinsburg. If you’re a fan of Pittsburgh hip hop, however, you probably know the name Hardo.

Barnett was a good student from a hard-working family who turned to slinging dope on the streets because the lure of big money was too much to ignore. Hardo is a hardcore rap artist with viral hits like “Cut Throat,” and working relationships with stars like Mac Miller, T.I. and Wiz Khalifa.

You’ve likely figured out by now that Barnett is Hardo and Hardo is Barnett. It might seem like an easy riddle to solve, but it’s more complex than that. So complex that, for a long time, the man himself lived and walked in two separate worlds until the ambitions of one nearly killed the dreams of the other.

Barnett was born on May 6, 1992, and his early childhood was uneventful. Unlike a lot of his friends in Wilkinsburg, Barnett had a pretty stable home life. He had a love early on for sports and music.

“Around 8 years old, I started recitin’ lyrics, listening to music and then doing my own freestyles,” Barnett says. “Me and my cousins would just play around and freestyle with these little recorder machines. But music wasn’t my ambition then, I wanted to be an athlete. … That’s what my life consisted of.”

As he got older, influenced by guys like Jay-Z and Little Wayne, his love for hip hop grew. Aside from sports and music, he was doing well in school and had plans to go to a trade school to study business management. His life was pretty ordinary.

“My parents didn’t live together, but they were both in my life and both doing good, and they were really strict,” says Barnett. “My clothes were clean, I had a hot meal every night and they made sure I had everything I needed.”

In that respect, he was luckier than his friends. A lot of them didn’t have a dime; they didn’t have parents who cared what they were up to; they were forced to fend for themselves. For most of them, that meant turning to the streets — slinging dope, committing robberies, using violence when necessary to get what they wanted and needed.

But Barnett didn’t feel like the lucky one. He was the oddball in that world. “My friends didn’t have nothin’, so they start selling drugs and I see them blow right past me,” Barnett says. “I’m coming around and I just got $20 from my dad and they sittin’ there with $1,000. I want $1,000 too.

“I think you adapt to the environment that you’re in. Like a fish, you grow to the size of your tank. Living in Wilkinsburg, crime was part of your environment, and I wanted all the things it could give me. I didn’t think about the consequences. I mean, I didn’t even know there were consequences.”

The name Hardo came from the forceful, compelling way Barnett was able to spit rhymes. It also had to do with the content of his early music, which addressed the dangers of crossing the wrong person or getting in the way of a guy who’s trying to make a living.

Obviously, the source material for Hardo’s songs came from Barnett’s other job as a dope dealer. But his love of music came first, and by the time he was 15 he knew he wanted to be a rapper.

“I would always write rhymes and rap to myself, but I wouldn’t ever recite it to anyone because I wasn’t a social person,” he says. But as it happened, he would ride the bus nearly every day with another local soon-to-be hip-hop star, Mac Miller. “He was known as EZ Mac back then, and I heard he had a recording studio at his house. I approached him one day and said, ‘What’s up with that studio, can I come record?’ … I made my first record in Mac’s bedroom before he ever became famous. That’s where it all started.”

And when Miller blew up, Hardo knew making it in this business was possible. “It was crazy; this was someone I knew. We were making records in his house not that long ago, and now he’s blowing up. That gave me the motivation to really try.”

Life on the streets

Joseph Barnett had already been rippin’ and runnin’ by the time he was arrested in 2009 for a home invasion in New Kensington. His family couldn’t believe it. There had to be some mistake. This was a good kid; no way was he into stuff like this.

In 2010, at age 18, he was caught with a brick of heroin. He represented himself in court and got adult probation. But it didn’t slow him down.

“Probation made me bolder,” Barnett says. “My other friends got jail time off of that. ... Then, I walk into court by myself and walk out with probation. I guess because of the weight, they didn’t think it was a big deal, but to me I was selling drugs and this is all that happened to me. So I kept going.”

Part of the problem, he says, was the lack of education about the consequences of his actions. His father had tried to shield him from the streets. Barnett was told that selling drugs was bad, but no one explained why it was bad or what could ultimately happen if he was caught. Growing up in Wilkinsburg, he says, slinging dope seemed to be as viable a job option as working at McDonald’s, and it paid better.

“We were young, we weren’t worried about the police,” Barnett says. “And, I didn’t fear jail at first because I had no idea what it was,” he adds. “You’d talk to people who’d been there and they act like it’s no big deal.

“You don’t get people telling the truth. They’re not saying, ‘I’m hurting, I can’t stand to be here any longer, I’m stressed out, I’m losing my hair and I’m shedding tears on the daily.’ Instead they say, ‘I’m standing tall, I ain’t worried, I’m doing this time with my feet kicked up, it’s easy.”

He’d soon find out how difficult real time in prison and the judicial system could be.

In 2011, the dual lives of Joseph Barnett would finally intersect.

In March of that year, Barnett was arrested with two bricks of heroin and charged with possession with intent to distribute. Because of his previous interactions with the court system, however, he wasn’t too worried about it. “I’d been through this already, and I decided to handle it myself again without a lawyer,” he says.

In April, while he was out on bail, Barnett decided that it was time to get his music out to the public to see what kind of reception it got. “At that time I didn’t have connections, but I had money,” he says. “So I started looking into how to make videos.”

One of the videos Hardo made was for “Cut Throat.” It showed the young artist and others waving handguns in the air, backed by lyrics about running the streets. Or as Hardo refers to it, “real life” at the time.

While the music side of Barnett’s life was coming together, the criminal side got a huge wake-up call. When he went to his last hearing prior to his trial on the drug charge, probation wasn’t on the table. The only offer being made was for two to four years in prison with a chance for early release if he was accepted into a boot-camp rehabilitation program. He initially declined the offer and sought a lawyer, but the case was so advanced, the attorney told him the deal was his best option.

As he prepared for prison, his video was released. To date, the video has more than a million views combined on various websites, including more than 750,000 on YouTube. “So here I was getting ready to go upstate, and my video was released. … I grabbed a fan base off of that and kept them because they liked what I was doing lyrically,” he explains. “Also, I think people connected to it because I was writing about and showing them real life.”

In the past, Hardo wrote about life on the street because that’s what he knew. But now, his music has taken a new direction. He wants others to learn from the mistakes he’s made and the beatings he’s taken, and he’s taken a few.

Released from prison in 2012, Hardo would connect with Miller, who was impressed by his “Cut Throat” video. He met industry players and got a management team, but within two months, he was back in prison on a probation violation. In 2013, he was arrested after being stopped in a vehicle with 250 stamp-bags of heroin. Hardo said the dope wasn’t his and that fingerprints and DNA evidence would prove it. He was acquitted, but spent more than a year in jail awaiting trial. In 2015, he was cleared of allegations that he battered a woman, but he was again jailed on probation violations. He served the remainder of his original sentence and was released in October 2015.

“These are the things I want to teach people through my music,” Hardo says. “I got out of the life but I didn’t change the people around me, and that almost got me another 10 years in prison. But I talk about all of that in my music. I have to.”

Hardo recently had a listening party for tracks off his new album, Trapanati II. While there’s not a date set, Hardo says the record will likely drop next month. The tracks will have a different vibe because this is a different Joseph “Hardo” Barnett. There will be songs detailing his struggle to escape the life. The newest cut, “Represent,” gives a shout-out to inmates who lose everything when they go to prison. There’s a song honoring women who hold things down while their partners are in prison. Basically, it will be a representation of both the life he’s led and the one he plans on leading.

“I’ve always tried to be real with it because I can’t show you the ins and outs of my life … unless I’m honest about it. You can’t tell somebody, ‘Don’t be bad, just be good.’ You have to show them the steps, show them how you know. If they can’t see and understand all of the negatives connected with something, they’re going to want to try it themselves. I couldn’t have avoided the road I’ve taken. If I hadn’t been arrested and gone to prison, my life would probably be way different. The money lured me in like it does a lot of people. People think they can get in, make some money and get out scar-free. It doesn’t work that way.”