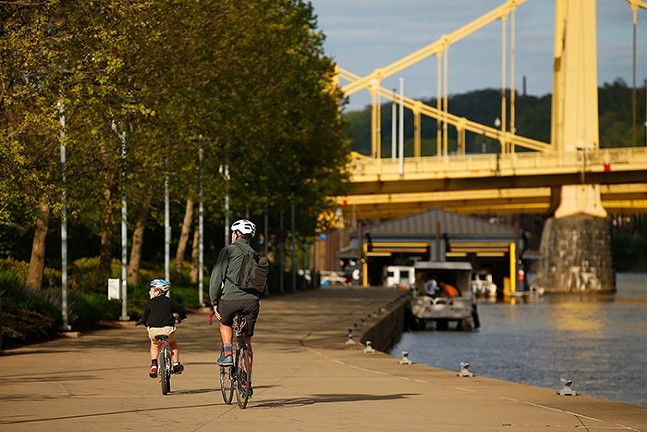 CP photo: Jared Wickerham
People biking on a trail on Pittsburgh's North Side.
Pittsburgh’s hilly terrain, car-filled roads, and abundance of bridges can present a challenge to walkers and bicyclists trying to get from neighborhood to neighborhood, but the city might be closer to a strong walking and bicycling metropolis than expected.

A new report from moveBuddha ranks Pittsburgh third for having the greatest potential for transitioning into a "15-minute city." A 15-minute city aims to provide everything — including education, work, health care, food, and recreation — within a 15-minute walk or bike trip.

The report created composite scores for the U.S.’s 78 largest cities based on walk and bike scores; dining, parks, and community scores; childcare density; and density of health care providers; and housing affordability.

With expanding bike infrastructure through the Department of Mobility and Infrastructure’s Bike(+) Plan, Pittsburgh may be getting closer to fulfilling its 15-minute city potential. In 2020, Pittsburgh was ranked as the seventh least car-dependent metro area in the U.S., and a 2019 City Lab report found that Pittsburgh was the 11th best region to live without a car.

While 85% of people still commute by car in the Pittsburgh region, the percentage is lower than other metro areas, especially those in the Rust Belt. Many of those commutes are short in Pittsburgh, as much of the city’s workforce is concentrated in Oakland and Downtown, creating the potential for more people to bike or walk to work with proper infrastructure and incentives. Walk to work rates in and around Downtown and Oakland are more than 36% of commuters.

However, Pittsburgh ranked low on childcare availability with a score of 2.8, slightly edging out San Francisco’s 2.3 but falling vastly behind Miami’s perfect score of 10. Its health and safety score of 5 put the city in third place for the category, once again falling behind Miami and San Francisco.

The report notes that housing affordability is often one of the biggest hurdles for cities that are otherwise well designed, as those communities are often rare and highly desired, which raises costs and pushes out lower-income residents. Pittsburgh already struggles with gentrification. It was the eighth most gentrified city in the country in 2019, and rising rents and forced departures due to new owners buying old properties exacerbated gentrification in some neighborhoods.

The city received a 7.3 housing affordability score, but its responses to gentrification will be a significant factor in whether Pittsburgh can fulfill its potential to become a 15-minute city.