“We were playing every day for hours and hours.” 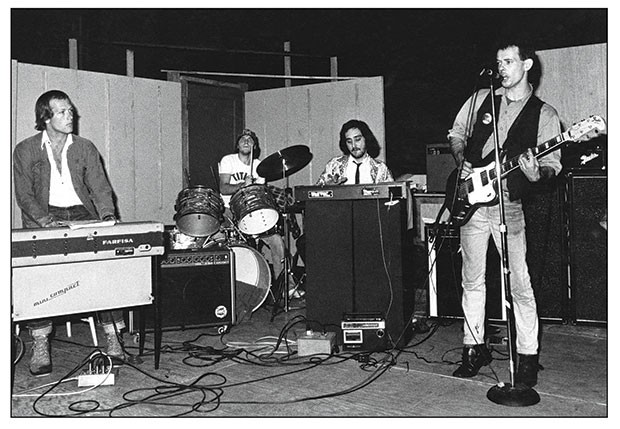 If one thing can be deduced from the Non-Punk Pittsburgh exhibition at SPACE Gallery, it’s the idea that once, anything was possible in the local music-and-arts community. The band Carsickness is proof positive. It came to life around 1979 and stayed together in various forms for roughly nine years, eventually morphing into the band Ploughman’s Lunch. The group was prolific, launching the independent record label T.M.I. (short for “towards musical independence”) and releasing three singles and two albums, along with work by other bands. This weekend, Carsickness reunites for two performances to coincide with the exhibition (which Carsickness drummer Dennis Childers curated with Larry Rippel) and the release of 1979-1982, a compilation drawing on the band’s catalog, released by Pittsburgh’s Get Hip Records.

Despite the times, guitarist/vocalist Karl Mullen (credited as “Joe Soap” on those early records) says the band’s music was not musically aligned with the Ramones or the Sex Pistols. “We knew, of course, that there was something going on in England and New York, something going on everywhere,” he says. “But this was us, doing our thing right where we lived.”

Mullen’s angry rasp sounded like a distant cousin of The Clash’s Joe Strummer, especially when telling off the leader of the Ku Klux Klan in “Bill Wilkinson.” But in addition to guitar, bass and drums, the lineup included two keyboardists and a saxophonist. Mullen, who came to Pittsburgh from Ireland and now lives in western Massachusetts, says the musicians used their instruments in non-traditional ways.

“Listening to that [compilation], the drums were like the lead melody. It was like an orchestra,” he says.

Carsickness was known for tense stops and starts during its songs, powered by Childers’ machine-gun drum rolls and bassist Chris Koenigsberg’s fluid lines. The band’s earliest work actually has the fury of punk rock, but the group also had the potential to sound like a sped-up version of Peter Gabriel-era Genesis. Childers got a kick out of novelist (and former Pitt student) Michael Chabon’s liner notes to the compilation, which refer to his intricate rhythms and patterns.

“I was pretty much just following Chris, as far as I can remember. It took a while to keep up with him,” he says.

Mullen and Childers both recall the fun of being in a band, but they promoted themselves extensively in those pre-internet days. This included piling into a van with no seatbelts and touring the East Coast and Canada. “We were playing every day for hours and hours,” says Childers. “We were in the studio. We were playing live gigs. We were really crazy-busy all the time.”

The reunion brings Mullen and Childers together with original keyboardist Steve Sciulli. Paul Michael Ferraro, who remastered 1979-1982, will handle bass duties. Mullen’s daughter Maura will join the group on guitar and vocals. Mullen, who tends to look forward rather than backward, sounds excited by the event. “If I’d been asked 15 or 20 years ago, I probably would’ve said no,” he says. “Now that [the album] has been remastered, to me it sounds great. It’s better than I thought it was.”

One last night at the Bloomfield Bridge Tavern

An overview of 'Non-Punk Pittsburgh,' at Pittsburgh's SPACE Gallery