“It’s so cheesy-sounding, we just love playing music together.” 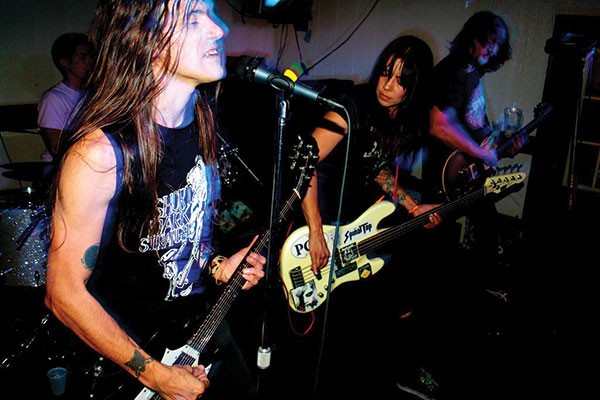 And Skull Fest seemed like a fitting venue to celebrate that milestone. The Mud City Manglers will help close the fest with a Sunday-night show at Gooski’s, where they’ll release a cassette compilation of all of their previously released 7-inches. “All our 7-inches are pretty much out of print,” Tarka says.

“People are constantly asking me, ‘Can I get one of those?’” Only 100 copies of the tape will be available. “After that,” Tarka says, “let the bastards re-digitize and upload them.”

The Manglers started making their trademark grimy garage rock in 1996, though Tarka and drummer Brian Porter have been playing music together since they were 13 and 12, respectively. The band saw several lineup changes in its first decade, but since the addition of bassist Mary Bielich eight years ago, and guitarist Matt Tuite a couple years later, things have remained steady. Listening to the band’s catalog, it’s clear that the members’ love of wild, loose, party-ready punk ’n’ roll has remained steady, too. “We basically were really raw and snotty at the beginning,” Tarka says. “We just kind of evolved that a little bit.”

Tarka isn’t the least bit surprised that the Manglers have lasted this long. “It’s so cheesy-sounding, we just love playing music together — drinking beer and playing loud noises,” he says. And if they’re still playing in 2026, that won’t surprise him, either. They already have plans for the near future — Canadian label It’s Trash! Records will put out an unreleased Manglers track on a compilation this fall, and the band aims to start recording a full-length record in the next few months. “It’s been a long time in the works. I think I’ve thrown away more songs than I’ve committed to vinyl.”

Nevertheless, Tarka still finds plenty to fuel his rock ’n’ roll. “I’m as pissed off now as I was 20 years ago,” he says with a laugh. “Maybe more.”

Heading to Pittsburgh’s Skull Fest? Our guide has got you covered