Collier and Zellers have written Steelers patriarch Art Rooney as a self-mocking Average Joe who hides blistering intelligence behind a Will Rogers-esque aw-shucks showman. 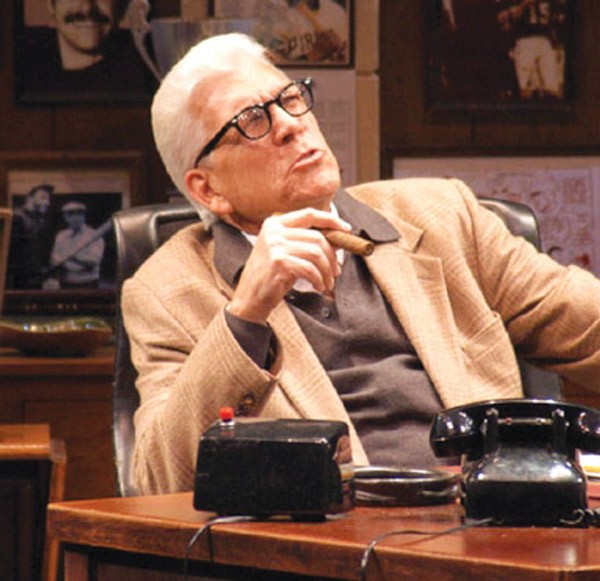 While it's true I'm not what you'd call much of a sports fan, it's pierced even my consciousness that the Steelers didn't perform up to expectations this year. (I follow the team's success by the amount of black-and-gold cupcakes available at Giant Eagle.) But take heart, you pigskin people, there is an alternative.

In 2003, the Pittsburgh Public Theater premiered The Chief, starring Tom Atkins as Steelers founding owner Art Rooney and written by local lads Gene Collier and Rob Zellers. The show's been revived nearly every year since and I hope you didn't believe the Public when the 2011 production was announced as the last ever. I mean, Judy Garland started giving farewell concerts in the middle of her career.

So The Chief is back this year, again with Atkins and directed by Ted Pappas.

The play is set in Rooney's office in Three Rivers Stadium in 1976. As Rooney closes up shop and dresses to go to a Knights of Columbus dinner honoring him, he talks to the audience about his past, some NFL behind-the-scenes antics and thoughts on the current state (circa 1976) of professional sports.

It should come as no surprise that the intent of The Chief is nothing less than godhead-polishing. There may be some who believe theater is the ruthless examination of the human condition, but I can guarantee you that the five of them haven't bought tickets. Collier and Zellers are there to praise Rooney and the audience is there to see him praised, so it's a win/win for just about everyone involved.

I should say that the final 15 minutes or so does find the sentimentality rolling out rather thickly, with Collier and Zellers pushing more emotional buttons than Spielberg. But that comes at the end of a very enjoyable evening.

In a lot of ways, Rooney's life — he was born in 1901 on the North Side — mirrors Pittsburgh's own relatively recent history and, indeed, the history of professional football: From gritty working-class beginnings, the grubby also-ran rises to achieve a national reputation. By far the most interesting aspect of Collier and Zellers' script is the historical snapshots provided, a glance back to a time when the Triangle was decidedly less Golden.

But the evening's most entertaining element is Atkins' performance. Collier and Zellers have written Rooney as a gruff, self-mocking Average Joe who hides blistering intelligence and insight behind a Will Rogers-esque aw-shucks showman. This nationally known Pittsburgh-based character actor inhabits the role utterly, giving life to all Collier and Zellers have provided him.

And since he's been appearing in the role since 2003, Atkins knows precisely when to play out to the audience and when to seduce them into his performance. It's rather mind-boggling to watch such a hugely talented man work the crowd as brilliantly as Atkins does here. It is, believe me, a billion times better than football.