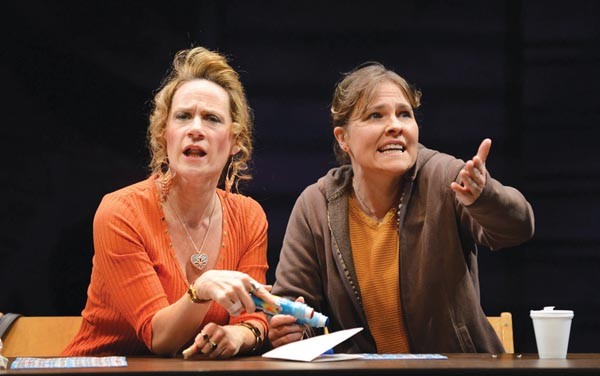 The history of Boston is a tale of two cities: On one side, there's Harvard, the Green Monster and the Liberty Trail. On the other, there's Whitey Bulger, the busing crisis and the Big Dig. Over here, Ivy League schools and hipster cafés. Over there, fistfights and crumbling tenements. Every city has its class struggle, but Boston's is old, entrenched and bitter.

Good People, by David Lindsay-Abaire, is about Margie, a broke middle-aged woman who has just lost her job at the dollar store. She looks up an old boyfriend, Michael, who is a well-to-do physician, thinking his office might have an opening, any opening. Margie's situation is urgent, because she cares for an adult daughter with special needs. Michael's reluctance to help Margie is deceptively intense, because he escaped South Boston and hoped never to look back.

Pittsburgh Public Theater presents this uncomfortable drama about poverty's despair, and the themes perfectly match our zeitgeist. On the 99 Percent spectrum, Margie is a particularly pathetic case. At minimum wage, she barely subsists; without work, she and her daughter could actually die in the street. Set against New England's cold and calloused culture, Margie's world feels especially dire. Despite Lindsay-Abaire's characteristic gallows humor, Good People vividly reminds us just how desperate most Americans are.

The Public wisely conscripted Tracy Brigden, artistic director of City Theatre, to direct this photorealistic script. In performance, the characters do a lot of standing, sitting and talking, but they seem afraid to interact with their environments, and their unease adds to the general alienation. The drama centers on Margie and Michael, who are holding two distinct conversations — polite chitchat and silent squabble — and in these complicated roles, Kelly McAndrew and David Whalen dominate their scenes.

As if to embellish the script's bleakness, scenic designer Jeff Cowie has created a backdrop of touristy Boston images. The set looks like a bunch of postcards arranged in a scrapbook. This is the city locals want you to see, full of quaint pubs and beautiful skylines. As the story unfolds downstage, the façade fades, until the graphics become literally transparent. The glitzy city yields to the gritty one, but Margie may be noticed too late.