The play is chockablock with the juicy roles actors love and the explosive scenes they crave to play. 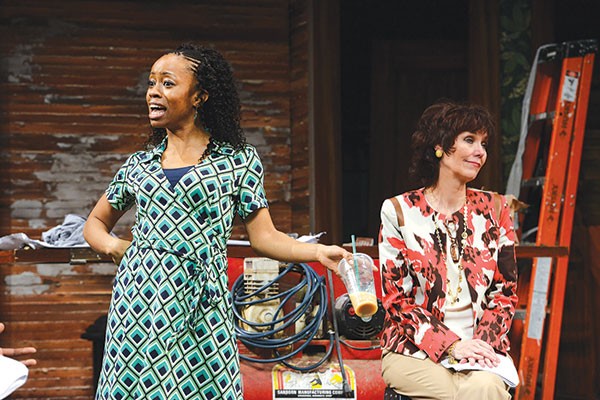 It's no surprise that Bruce Norris, author of 2010's Pulitzer Prize-winning comedy Clybourne Park began his career as an actor. The play, now at the Pittsburgh Public Theater, is chockablock with the juicy roles actors love and the explosive scenes they crave to play.

Based on — or rather, suggested by — Lorraine Hansberry's landmark Raisin in the Sun, the show opens in 1959. All-white members of the titular neighborhood gather to beg friends not to sell their house to a black family (the characters from Raisin). Act II is the same house in 2009. The neighborhood has been all black for years, but now a white couple is trying to buy (and gentrify) the house from descendants of the Raisin family

Norris uses this set-up merely as a springboard for an unending supply of jokes. Clybourne Park is one of the funniest shows I've seen in a while, though it's a very particular sort of humor. Fans of Arrested Development and BBC's The Office will recognize its humiliation comedy. Norris places on-the-edge characters in over-the-top situations and has everyone say exactly what they shouldn't. Clybourne doesn't examine "the race question" so much as exploit it — the morality of which might have bothered me if I hadn't been laughing so hard.

Like some actor-written plays do, Clybourne falters on the bigger picture. Act I is all familial secrets dragged into the daylight, while Act II has no plot and little dramatic movement. The play goes pear-shaped when Norris widens his focus and suddenly all minorities are attacked; it's more theatrically convenient than reality-based.

The cast features seven actors playing a different person in each act, and it's a great opportunity to see this company display very impressive acting chops. This is very much an ensemble show, and Brad Bellamy, Lynne Wintersteller, chandra thomas, Jared McGuire, Bjorn DuPaty, Tim McGeever and Megan Hill turn in impressive work, especially when juxtaposing their Act I and Act II duties.

Michael Schweikardt's designed a terrific set and Pamela Berlin's direction couldn't be bettered. She keeps the comedy front and center while perhaps giving the work more depth than it actually possesses.

I was in the mood for fun, entertaining theater. Clybourne Park delivers.