The stage is open to performers of all stripes, from stand-up comics to jugglers. 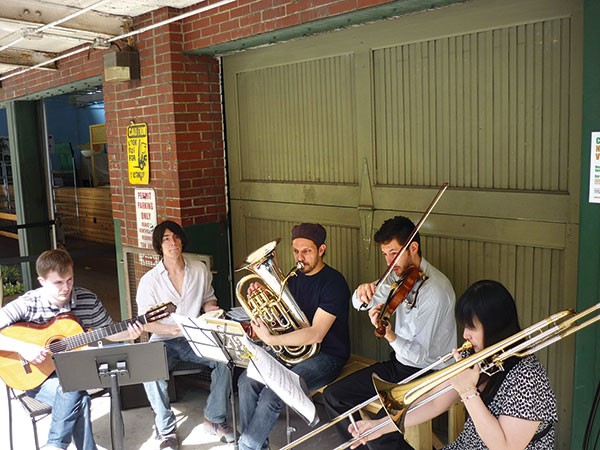 (hosted by alternative band The Unsmokable Brokes) and the first Sunday of each month.

At the Pittsburgh Public Market, you can find local vendors selling produce, meat and dairy. But this Strip District buffet includes more than food: You can also catch performances by everything from magicians to guitar players, as well as the occasional stray songbird.

Since February, the Market has hosted open-stage shows on the first Sunday of every month. With the weather warming up, the warehouse, mere blocks from the recently frigid Allegheny River, is attracting bigger crowds of young parents, urban farmers and, yes, birds. Between the taquerias, coffeeshops and cheesemakers, the atmosphere begs for the accompaniment of an acoustic guitar. Selecting artisan cheeses is an experience best accompanied by folk music, in any national style.

Rachel Kudrick, who organizes community events and outreach at Pittsburgh Public Market, knows her venue's strengths. Recent open-stage hosts have included bossa nova bard Tracy Drach and local emissaries of Brazilian choro style Choro No Vinho, who were twice invited back to play the space on their own.

The multicultural atmosphere doesn't end with musical genres. The stage is open to performers of all stripes, from standup comics to jugglers. As hot as the space can get in summer, it hosted a bellydancer back in the wintry days of March; it makes you shiver just to think of it. Other months, the dancers are off-stage: The market is popular with young parents, and it's not unusual to see kids bopping along with the music in the ample space.

But the market space doesn't demand or even request exotic work. After all, half of the fun of open-stage shows is seeing people perform, for the first time, something that blossomed in their basement.

The April show concluded with an impromptu trio by several performers. Five to 10 minutes on stage are available to anyone who asks, says Kudrick, as long as it's kept family-friendly. "I'm just amazed that folks are willing to share their talents, even when they're unsure of themselves," she says. "It makes me very happy to have been able to provide a space for that."