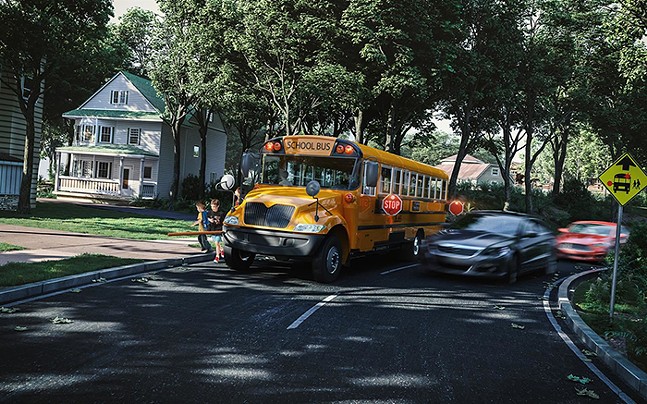 Photo: Courtesy of BusPatrol
BusPatrol works with school districts across the country to stop drivers from illegally passing school buses when stop sign arms are extended.

More than 500 drivers illegally passed stationary Pittsburgh school buses during a two-month period this summer, according to a pilot program implemented by the city’s public school system. Officials say a self-funding artificial intelligence camera system could bring this number down.

The violations were recorded by cameras installed on the outside of 19 Pittsburgh Public School buses by Virginia-based tech company BusPatrol, with which the school board approved a long-term contract during a public meeting in late August.

Director of Pupil Transportation Megan Patton says the problem of motorists ignoring bus stop signs has been a longstanding concern for the district. When BusPatrol reached out, Patton says, school officials saw an opportunity to address the problem.

“Drivers and crossing guards would report that they were seeing these issues,” Patton tells Pittsburgh City Paper. “It is something they were wanting to do for a time, and it took us a few months to actually start the process and get a trial period set up, which occurred towards the end of last school year and over the summer.”

Ellen Diaz Taffel and Eric Keller are both parents of PPS students and have lived in Stanton Heights for more than a decade. They say Stanton Avenue is known by neighbors as a dangerous road, where, they say, despite a 25 mph speed limit, it is common for cars to drive above 40 mph and not stop for pedestrians.

“Some drivers can certainly be jerks, but it was almost above and beyond sometimes,” Keller recalls. “I can’t tell you how many times the bus driver would just lean on the horn because people were going around. They have no other recourse.”

Diaz Taffel has seen this kind of driving endanger students, as well as other drivers.

“I think we’ve seen near-accidents as well because cars will go across the double yellow line to get around a bus and then there is another car coming,” Diaz Taffel says.

Both parents believe the problem is distracted driving.

“It doesn’t mean it’s any better that you're daydreaming while you’re cruising past a school bus with lights on, but these were people that stopped behind the bus, got impatient, and then zoomed around it,” Keller says. “These were people who knew they should stop yet still went around.”

Over the course of the five-year contract, the company will play an active role in citation management, according to Patton. The AI technology used by the cameras captures video and other information such as time, date, and GPS location while the bus is running.

Through a multi-step process, video is accessed by a software system that gathers information and determines if a violation event occurred. Then, data and footage can be sent to a human reviewer. This technology allows a reviewer to look at thousands of events per day.

From there, BusPatrol can share information with local law enforcement who will issue a citation. The first violation will be a warning, while repeat offenders can expect to receive a $300 fine, five points added to their driving record, and a 60-day license suspension.

Inside the buses, the old internal cameras are also being replaced by BusPatrol technology. The monitoring of footage will also be handled by the company, but the school district can access the footage at any time. According to the Director of Public Relations for PPS, Ebony Pugh, the new cameras will provide better coverage with updated technology.

School officials say the program is free to the district because BusPatrol offers a violator-funded business model. The money issued from a $300 fine will be split between all partners, with the state and the local police department each pocketing $25 and the remaining $250 split between BusPatrol and PPS under a confidential agreement.

The district is also using its website and social media platforms to help drivers familiarize themselves with the laws surrounding how to interact with school buses on the road.

BusPatrol claims its program also deters repeat offenders, with participating districts set to see the rate of violators drop 20-30% in the first year.

For those that do receive a violation, BusPatrol claims 99.8% of them do not repeat the offense. Drivers issued citations can also contest tickets or contact BusPatrol’s call center for violator support.

PPS staff like Patton say this program is a no-cost option to improve student safety with no clear downside.

“The safety of our students is top priority, especially after watching the pilot video,” she said. “It is very scary how many drivers don’t obey the school buses.”