Genevieve Barbee-Turner
Bridge Witches tarot deck
People resort to a variety of methods to find some semblance of order in this chaotic time. For some, occult intervention could be just what they need to feel more in control. This is the kind of service being offered by mediums and readers of tarot and other divination tools. And readers throughout Pittsburgh are employing various methods to help their clients, including tarot cards, clairvoyance, and, in the case of Dr. Amber Epps of Arts & Crafts: Botanica & Occult Shop, coconuts.

Epps says coconut shell readings answer a client's question by the way that the shells fall when they are thrown or tossed onto a special board that she uses.

“This particular type of reading also involves initiating a connection with the spiritual world,” says Epps, who co-founded Arts & Crafts with her sister, Pamela Schön, and Elizabeth Kivowitz. “The spiritual world determines how the shells fall. Once the shells fall and the answer to the question is given, there is often guidance or additional information that comes along with the response.”
click to enlarge 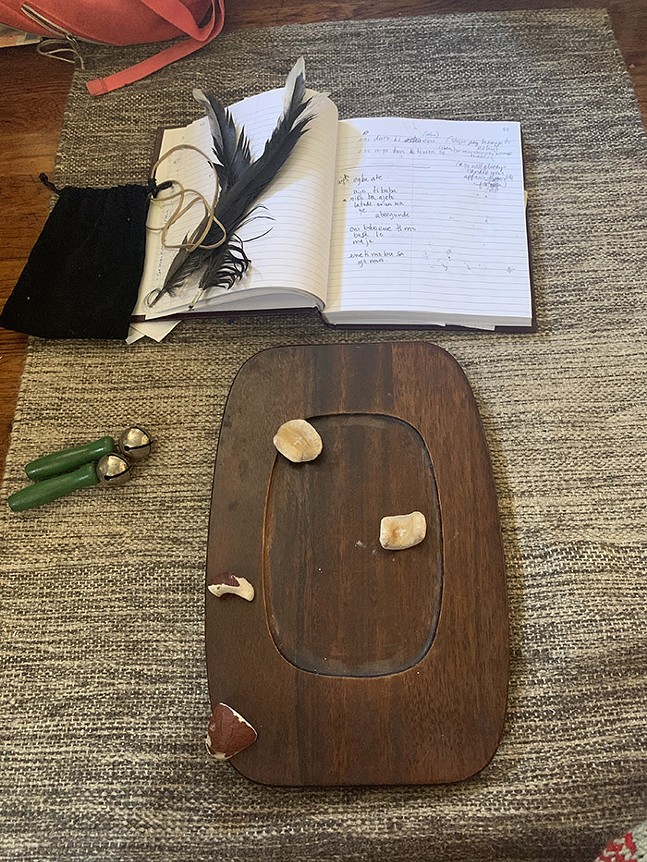 But these services are less about predicting the future and more about finding guidance and solace in a time of political and social turmoil, both for readers and the clients.

Even though they closed the Arts & Crafts shop in late March to comply with COVID-19 shutdowns, Epps and Schön say they do offer consultations over the phone and online. Despite being available beyond in-person consultations, they, along with tarot reader Stephanie Ten Sivak and self-described psychic coach Tamar George, say they have seen a decrease in clients during the pandemic, possibly due to financial difficulties related to unemployment or other issues.

Those who have been reaching out to them are usually looking for a more therapeutic outlet, something Sivak believes is a “wonderful use for tarot or any other spiritual practice.”
click to enlarge

“Good therapy encourages you to go inside yourself and question the internal patterns that might be manifesting externally and shaping your life in ways that aren't working for you,” says Sivak, who has also been teaching low-cost online tarot classes during the pandemic. “And like therapy, a tarot reading is a dialogue between the reader and the client. 'Let's sit down and talk, and try to throw judgment and fear out the window.' I want people to leave my presence feeling better about their situation, whatever it is.”

Used for centuries, tarot involves a deck of cards with various symbols and imagery. Cards are shuffled and laid out into spreads that can then be used to answer questions. While there are a variety of deck styles readers can use, Rider-Waite is the most commonly known.

Leslie McAllister, owner of Juju, a ritual lifestyle and tarot studio in Point Breeze, agrees that what many people view as fortune-telling actually encourages people to work through issues and feel more confident in their decision-making.

“What is so empowering about tarot [is] it allows the questioner to feel this sense of confirmation,” says McAllister. “It's so nice to hear a stranger say, 'You're right.'”

George says many of her regular clients have been “asking about the paradigm shift that has occurred” with what she calls a move from a “fear-based reality (Piscean Age) to a love-based reality (Aquarian Age),” and need insight on what “new directions are possible now.”

Similar to tarot, she says “psychics can gift a probability and help you think things through.” “We have enough people that are not feeling empowered right now,” she says. “We are each living in a lot of fear and it’s important to give hope that something greater is going on.”

McAllister observes that “a lot of people are starting to realize they're coming into their own personal power.” She and her peers have noticed a repetition in drawing cards from tarot's minor arcana, which represents a royal family, leading McAllister to believe that people feel a desire to “step into their sovereignty and grace and be a leader in their community, company or family,” which is usually symbolized by a queen or king.

She adds that, while devastating, the virus has also provided a sense of “stillness and rest,” allowing people to pause, “step aside from the bullshit,” and figure out ways to restructure a system that has become out of balance.
click to enlarge

Suzanne Bishop, an art therapist and spiritual and pastoral counselor who practices under Intuit Now/OMawake LLC, does not recommend using tarot or any other reading as therapy; when appropriate, she will provide her clients with names of licensed counselors and therapists. However, she says that clients have seemed more drawn to the “metaphysics side of life” during the COVID-19 crisis.

“We are in a time of great change right now, materially and spiritually,” says Bishop.

Artist Genevieve Barbee-Turner has turned to tarot in a different way. Though she does casual readings, Barbee-Turner — who works under the name KI11ERPANCAKE — designed and released her own deck, Bridge Witches. She created it in response to what she views as the limited Christian and binary gender imagery in Rider-Waite, as well as its misogynistic origins, pointing out how Pamela Colman Smith, the Jamaican-British woman behind the deck's iconic designs, was never properly compensated or credited for her work.

She describes Bridge Witches as more reflective of the world around her, one that includes LGBTQ and non-binary people and people of color. She also uses the deck to explore issues currently affecting Pittsburgh, including gentrification, income equality, and homelessness.

Barbee-Turner says one couple used her deck as they were planning their move to Pittsburgh, as it provided a different perspective on the city that didn't just focus on “pierogis and football.” “My deck is a living document,” says Barbee-Turner, adding that it also covers the influence of tech and gig culture, and millennial burnout.

She agrees that most people don't think tarot is magic, herself included. “People come to tarot with weird vague ideas of what tarot cards are,” says Barbee-Turner. “These cards are made in a printing facility that makes games.”

Even when used as a visually pleasing bit of fun, Barbee-Turner believes “entertainment and art have always forever been vehicles for social change,” and is currently working on a “feminist goth tarot deck” that uses horror film imagery as a vehicle to “tell more queer and feminist stories.” Overall, readers see tarot as a tangible tool that can be used for self-care, comfort, and connection, especially in a time when social distancing, shutdowns, and shelter-in-place orders have kept people physically apart.

“What the virus has taught me … is that there is tremendous loss and grief, and we immediately assume that the future will also be fearful,” says McAllister. “The unknown does not have to be fearful.”