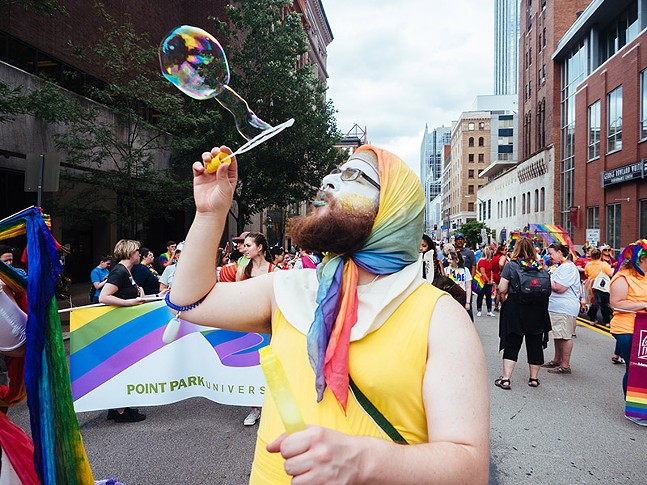 CP photo: Jared Murphy
Delta Foundation's 2019 Pittsburgh Pride in the Streets
Earlier this year, Pittsburgh’s Pride festival was postponed due to coronavirus, and today it was announced that the annual LGBTQ festival and parade has been canceled.

Pride in the Streets, the state’s largest LGBTQ pride event, was originally set for July, and then was rescheduled to this fall when the pandemic hit. But now, the annual celebration put on by the Delta Foundation has been canceled for 2020 entirely.

"It's very important to the region and very important to our community, and when we postponed in July, we thought it would buy us some time to hopefully see some movement to hold large-scale special events, but as fall is quickly approaching, we're seeing that that is not going to be a reality," said Christine Bryan of Delta to WESA.

Delta Foundation, the region’s largest LGBTQ group, also announced an internal audit and change in leadership today. Former Board President Gary Van Horn took a leave of absence from the Delta after turning himself in late last year on charges of impersonating a law enforcement officer.

On July 9, Delta announced that four new board positions would be opening up, and the organization specifically asked for applicants from the trans, non-binary, lesbian, and QTPOC communities (queer and trans people of color). Over the years, Delta has come under fire for neglecting the trans and QTPOC communities, so much so that alternative pride celebrations, like Roots Pride, formed in protest of Delta’s larger Pride in the Streets festivals.

Today, Delta announced election results and board member and construction company CFO Marty Healey, of Shadyside was named president. Other new leadership positions include Jon Holmes for Vice President, Eddie McAndrews for Secretary, and Chuck Honse for Treasurer, according to WPXI.

Stanley, who is Black and trans, is the founder of local advocacy group TransYOUniting and has been on the board for the last few years.