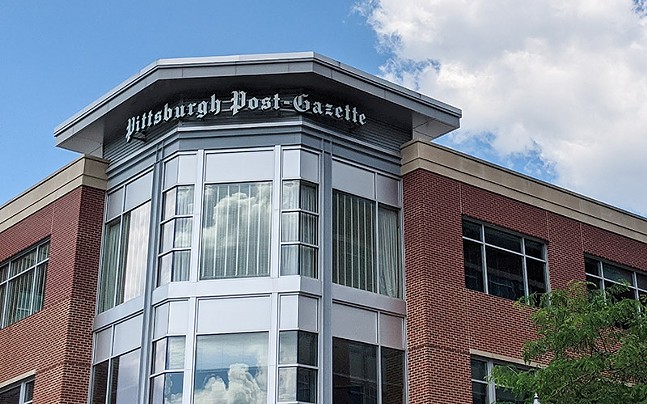 CP photo: Lisa Cunningham
The Pittsburgh Post-Gazette offices on the North Side
Journalists at the Pittsburgh Post-Gazette will soon vote to go on strike following a move by management that implemented parts of a new contract without consent of the Newspaper Guild of Pittsburgh, the union representing more than 120 journalists currently on staff at the paper. The Post-Gazette is the largest newspaper in Western Pennsylvania, and its reporters were awarded the Pulitzer Prize in 2019 for their coverage of the Tree of Life synagogue shooting.

Executive committee guild members unanimously voted today to approve a strike authorization election that will soon occur by mail-in vote. If that strike vote garners a simple majority, the executive committee of The Newspaper Guild, the parent union of Pittsburgh’s Newspaper Guild, will then vote to authorize the strike. Then, the board of Communications Workers of America, the head union of The Newspaper Guild, will vote; then, it must be authorized by the Communication Workers of America president Chris Shelton, who determines the start date of the strike.

The mail-in vote process shouldn't take long, but won't happen immediately, according to Guild president and P-G reporter Mike Fuoco. Then, the parent unions will have to authorize the strike if mail-in election is successful.

Last night, the P-G ran a byline-less story online with the headline, "Post-Gazette implements new contract." The story is about 100 words long and includes no comment from the Newspaper Guild of Pittsburgh, and there is little detail provided besides saying the new contract includes a wage increase of 8% over three years and “a quality health care plan.”

Over the past two years, P-G ownership has failed to pay health-care premium increases for workers. The guild challenged that decision and last year, an arbiter ruled in the guild’s favor.

Fuoco says there is no new contract and that ownership is imposing its terms on to the guild members. He says ownership eliminated seniority, severance, and the ability for workers to file grievances. According to Fuoco, management is forcing members onto their health-care plan, which can be altered at any time. He says these impositions have compelled the union to take up a strike vote.

"The strike will be on ownership's bad faith bargaining since 2017, the unlawful declaration of an impasse, and imposition of working conditions that strip all of our rights that have been negotiated over for the last 85 years," says Fuoco.

The P-G story about the new contract states that ownership and the guild have “reached an impasse in contract negotiations” and so ownership implemented certain portions of what the story describes as its “final contract offer to the Guild.”

Rules from the National Labor Relations Act state "If negotiations reach an impasse, an employer can impose terms and conditions so long as it offered them to the union before impasse was reached."

Fuoco says the guild is challenging this, and calls Block Communication's declaration of an impasse unlawful.

"We are doing everything that we possible can to fight this latest injustice," says Fuoco.

A request for comment to Post-Gazette management was not immediately returned.

P-G journalists have been working without a contract for the last few years, and they have gone without a pay raise for more than 14 years. Tensions between the union and ownership boiled over last year when journalists completed a “no confidence” vote against P-G management. And tensions have only increased since then. In December 2019, Pittsburgh City Paper documented how the stressful and chaotic work environment of the newsroom leading to longtime and accomplished journalists fleeing the paper.

In June, things went nuclear. After P-G management removed two Black journalists, Alexis Johnson and Michael Santiago, from Black Lives Matter protest coverage for an alleged “bias,” union leadership stood in solidarity with Johnson and Santiago and demanded that Burris and managing editor Karen Kane both resign. The Post-Gazette has since lost large advertising clients and was removed from Giant Eagle grocery stores in response to Johnson's and Santiago's removal from protest coverage. Santiago has since accepted a buyout, telling CP, "I can’t work for a paper that treats their employees like this." He's one of at least 14 employees who have left the newspaper in its latest round of company buyouts.

CP acquired an email from Block Communications sent out yesterday to P-G employees forecasting a strike reading that, “In the event of a strike, the Company will continue its normal operations and publish the Post-Gazette.” Ownership also encouraged workers to cross the picket line if there is a strike, though reminded employees that in Pennsylvania, a union may fine and suspend a union-member employee for performing work during a strike or for not honoring the picket line.

“This means there will be plenty of work available for those who desire to work,” read the Block Communications email. “Employees can strike or continue to do their work and earn a living."

Yesterday, Block Communications sent an official response to the Newspaper Guild of Pittsburgh on the “current state of union negotiations.” The response is very similar to the story that ran last night, and includes little details, beyond the alleged impasse, the 8% raises, and information about how other unions representing P-G employees have already ratified contracts.

The response from Block Communications says the company values “all employees of the Pittsburgh Post-Gazette and [wants] to ensure the future of a daily newspaper for Pittsburgh.”

Fuoco believes ownership's decision to implement certain parts of a new contract is another effort by Block Communications to break the union.

"They have really tied into our jurisdictions for our work," says Fuoco. "Managers can do our work and they cut down on the limit of stringers the paper can use."

He says the 8% raise will not even make up for the amount journalist now have to pay to be part of the health-care plan, let alone what he believes members deserve after 14 years without raises.

"In the last three and half years, they hired the law firm  King & Ballow to break us," says Fuoco. "We [knew] this was going to come."