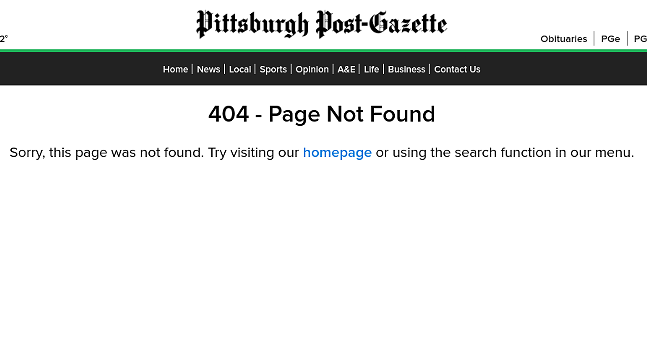 Screenshot taken from post-gazette.com
Late in the evening on June 5, the Pittsburgh Post-Gazette removed two stories from its website that were shared earlier in the day on the paper’s social media platform. One story was written by P-G reporter Lauren Lee and summarized a march that snaked through Pittsburgh East End in honor of George Floyd, a Black man killed by Minneapolis police. The other was a story wrapping up statements from Pittsburgh City councilors for a discussion about police brutality and reforms.

This story was written by P-G reporter Ashley Murray who tweeted that she reported the issue to the newsroom at 8:40 p.m. and still hadn’t heard back as of 11:30 p.m. As of late night on June 5, the stories were still posted on the paper’s social media platforms, but the links were dead.

I filed a story today about Pittsburgh City Council members' reaction to and discussion about police brutality and reforms. Some readers have brought it to my attention that the link is broken. I alerted the newsroom at 8:40 about the issue.https://t.co/oWxiC3U5gs 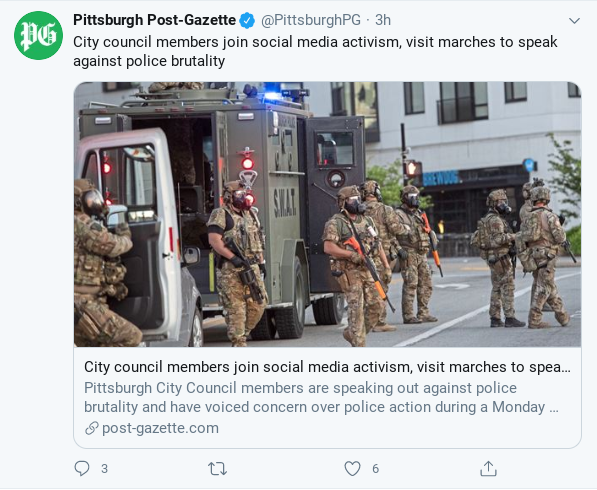 Screenshot taken from Twitter
Ashley Murray's story posted on Twitter
Sometime early in the morning of June 6, new links were created with the original headlines, but they contained no bylines. Pittsburgh City Paper editor Lisa Cunningham confirmed with Murray that the story she originally wrote was rewritten and that the lead photo was changed.


The P-G also posted a new story this morning, using the same headline as @Ashley__Murray's original story, but different lead photo, and the new story is without a byline. Murray confirms it is not her words. pic.twitter.com/LcwMLFcvrt

Lee also confirms that a new story has replaced her coverage, and that her byline was removed and the lead photo was changed. Instead of a shot showing protest signs, the new lead photo is now of Pittsburgh Police kneeling with marchers at a different march than Lee covered. P-G photographer Andrew Rush's photos were also removed from the story.


It seems as though the story was pulled last night. This morning, however, a new story has been uploaded without my byline, and photos by photographer Andrew Rush who was at the same protest are not there:https://t.co/G74Wchf60k

These apparently removed and replaced stories come on the heels of a Twitter protest undertaken by members of the Newspaper Guild of Pittsburgh, the union that represents the 140 staffers at the P-G. Today, guild members and others reposted P-G staffer’s Alexis Johnson’s tweet word for word with the hashtag #IStandWithAlexis.

On Thursday, P-G management removed Johnson, who is Black, from reporting on George Floyd protests because of a tweet she sent on May 31 joking about the notorious messes typically left by fans outside of Kenny Chesney concerts, and comparing that to property damage done by looters in cities following recent protests.

P-G managing editor Karen Kane didn't respond to comment and instead directed CP to guild leaders. In an Associated Press story about the union’s Twitter protest, Kane wrote in an email that P-G’s editors cannot comment on personnel matters. According to the Twitter account of Pittsburgh bookstore City Books, Kane said, “I am aware of the broken links but nothing has been removed. I can't comment about personnel matters for obvious reasons but Alexis remains a valued part of our great staff. I'm sorry for your alarm and I appreciate your passion.”


My response from Karen Kane: “I am aware of the broken links but nothing has been removed. I can't comment about personnel matters for obvious reasons but Alexis remains a valued part of our great staff. I'm sorry for your alarm and I appreciate your passion.”

However, stories were removed for several hours last night, and reporters say their words have been replaced. According to a P-G staffer who wished to remain anonymous, the replaced version of Murray's story was uploaded by a member of non-unionized management at 7:47 a.m. on June 6. This staffer shared a screenshot of P-G's publishing software to confirm this.

Newspaper Guild of Pittsburgh president and P-G reporter Mike Fuoco tweeted last night, indicating there is some link with reporter’s support for Johnson and why the stories were pulled from the P-G website. Both Lee and Murray participated in the Twitter protest and tweeted the hashtag #IStandWithAlexis.

P-G photographer Michael Santiago noted on Twitter that the stories pulled also meant that staff photographers would not have their images shown on the paper’s website.

Today, Santiago, who is Black, tweeted that he was barred from covering protest related stories. He condemned P-G management for choosing to "silence two of its most prominent Black journalist[s] during one of the most important civil rights stories that is happening across the country!" An email obtained by CP between guild leadership members, likely confirms Santiago's removal from protest coverage. In fact, the Post-Gazette might be pulling all photographers off protest coverage entirely.

“He said that ‘WE’ are no longer scheduling or shooting protests,” reads the email sent yesterday evening from a union photography staffer, referencing a conversation they had with a management-level P-G editor. “And I said by ‘WE’ you mean photo editors and he said yes. The photo dept as a whole is no longer shooting protest photos.”


Just like @alexisjreports I have been barred from covering any protest related stories. @PittsburghPG has chosen to silence two of it most prominent Black journalist during one of the most important civil rights stories that is happening across our country! https://t.co/ppIHrAyiOd

In response to specific questions about whether P-G was pulling photographers off of protest coverage, Kane told CP to contact guild leadership. Fuoco says he heard that management had told photographers that they wouldn't be shooting protest anymore, but he hasn't received anything official.

Fuoco adds that he believes all of these decisions are "clearly in retaliation for the support of Alexis." He says the entire situation can be resolved easily, if management just takes away the ban on Johnson covering protests. "This doesn’t have to be like this," he says.

Furthermore, P-G copy editor and page designer Alyssa Brown says that protest stories would also not be printed in the print weekend edition or on newsstands on the morning of June 6. She called the move “censorship.”


Let me give you some FACTS. There were TWO protests in the city of Pittsburgh tonight but you would not know that looking at the PG website or at the print weekend edition that will be on newsstands in the morning. I do not have the words to describe my anger. This is censorship.

There was coverage related to the protests still up on P-G’s site today. But it is a story focused on the criminal charges levied against the 20-year-old Shaler man who allegedly started initiating the damage of a police vehicle during the protest on May 30.This story was originally posted at 1 a.m. on Sat, June 6. The story was updated with additional information on June 6 at 12:30 p.m. and again at 5:20 p.m.

Several hundred protesters marched from Friendship Park to Shadyside on Friday afternoon to protest the police killing of George Floyd, kicking off another weekend of police brutality protests across Pittsburgh. https://t.co/0KzZYRQD65