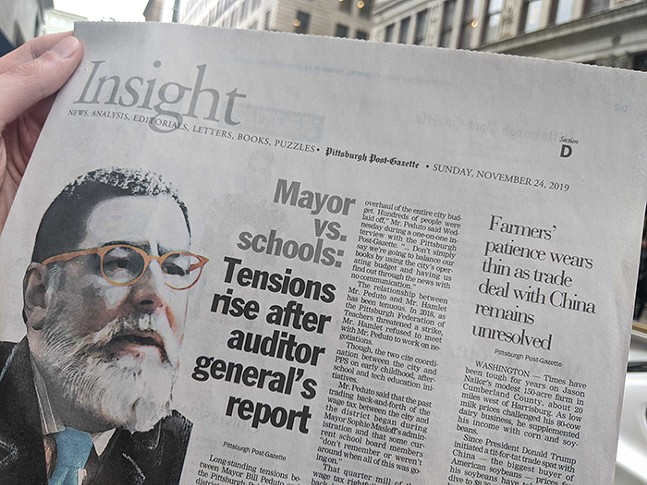 CP photo: Lisa Cunningham
A byline-free page of the Pittsburgh Post-Gazette
Last week, journalists at the the Pittsburgh Post-Gazette had been through enough. As Pittsburgh City Paper reported, staff at the P-G alleged several instances of mistreatment from management over the past year, which included a newsroom tirade by publisher John Block, forcing out longtime editors, firings, and reassigning beats of reporters who were supported by the Newspaper Guild of Pittsburgh, the labor union representing about 140 P-G staffers.

On Nov. 18, the guild announced a vote of "no confidence" against management and started a byline strike in protest. Freelancers also joined the byline strike, and most stories in the P-G have had no listed authors for seven days. Guild members started to sport "no confidence" buttons and non-union workers and allies are wearing "I Support the Byline Strike" buttons.

The guild released a press release today to say the labor protests will continue indefinitely. The guild is pointing its criticism at Executive Editor Keith Burris, Publisher John Block, and ownership at Block Communications Inc.

"We are unified and resolute in protest of the unprecedented, unconscionable atmosphere of fear, hostility, and intimidation that Burris and the Blocks have created in the North Shore newsroom," said guild president Michael Fuoco in a press release. "And we stand united in our quest for economic justice."

Fuoco added that the byline strike is ongoing and guild members and allies will "continue this fight for a non-hostile workplace and economic justice, even to the point of the most extreme measures."

Burris didn't immediately respond to a request for comment for this story.

Guild members at the P-G have gone without a raise for more than 13 years. According to a press release, guild members also experience cuts to the health care, and been mired in negotiations with an anti-union law firm from Tennessee.

Despite all of this, the P-G newsroom was awarded a Pulitzer Prize for its reporting on the Tree of Life tragedy.

Fuoco said P-G staffers are focused on continuing to serve the community as journalists, and are hopeful that management will come around to their way of thinking to preserve Pittsburgh's largest newspaper.

"We hope and pray that the Blocks and Burris come to their sense before they permanently destroy an iconic newspaper whose roots go back to reporting on passage of the U.S. Constitution."