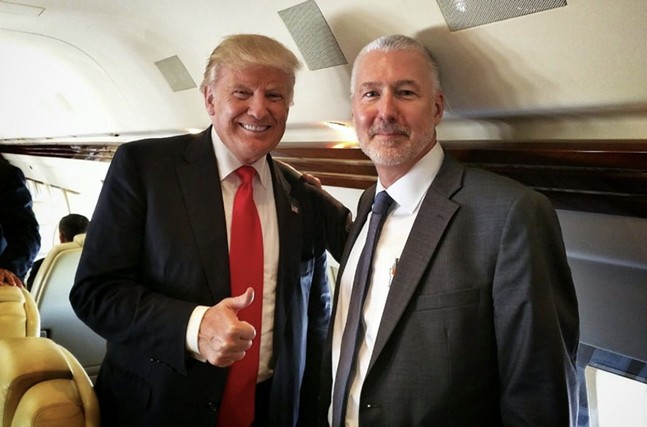 Donald Trump and Keith Burris in 2016
In 2016, Pittsburgh Post-Gazette publisher and then-editor in chief John Robinson Block was photographed on a private plane with presidential candidate Donald Trump. The photograph was shared with Pittsburgh City Paper by a source who took a screenshot of it from Block’s Facebook page with the caption, “In 39 years of full time journalism I’ve met many interesting people. This one was more than memorable.” In the photo, both men are smiling and Trump is giving a thumbs-up to the camera.

The photo circulated widely on social media throughout the city, with some claiming it showed the head of Pittsburgh's largest newspaper favoring Trump. But what didn’t circulate as widely in Pittsburgh at the time was that Keith Burris, then the Toledo Blade editorial page editor, was also on the plane with Trump and Block. Today, Burris is the Executive Editor of the Post-Gazette in addition to being the director of the opinion pages of both newspapers.

A photo of this occasion, shared with City Paper earlier today by an anonymous source, shows Burris with his hand on Trump’s shoulder as Trump gives a thumbs-up sign.

Why is this significant today?

This morning, Burris posted a non-apologetic response to the recent controversy surrounding the Post-Gazette. In a column titled Truth, Fairness and the Pittsburgh Post-Gazette, Burris writes, “We will not apologize for upholding professional standards in journalism or attempting to eliminate bias.”

That claim of "attempting to eliminate bias" was a decision by management that sent the Post-Gazette newsroom in turmoil. Management, like Burris, removed Alexis Johnson, a Black reporter, from protest coverage last week after claiming she showed bias because of the tweet below:


Horrifying scenes and aftermath from selfish LOOTERS who don’t care about this city!!!!!

.... oh wait sorry. No, these are pictures from a Kenny Chesney concert tailgate. Whoops. pic.twitter.com/lKRNrBsltU

Since then, Michael Santiago, a Black photographer at P-G, was also removed from documenting the protests, two published stories were pulled from the P-G website, and dozens of other union journalists have been “conflicted out” of coverage after also showing support. Basically, claiming more than 80 journalists on staff were too biased to cover one of the biggest civil rights movements of the modern era.

Again, why is the Trump photo significant?

Because when you’re calling out a staff member for bias, without even explaining what exactly her bias is, it’s important to take a look in the mirror.

It was under Burris that longtime editorial cartoonist Rob Rogers was fired for what Rogers said were his critical cartoons of President Donald Trump. Rogers was replaced by cartoonist Steve Kelley, who received criticism for drawing three sexist cartoons within one week.

Burris is also the author of a now-infamous 2018 editorial, “Reason as Racism,” published on Martin Luther King Jr. Day, claiming that "[c]alling someone a racist is the new McCarthyism." The editorial acted as a defense of Trump, since the president said racist statements when calling immigrants from Haiti and African nations as coming from "shithole countries."

"If the president had used the world 'hellhole' instead, would that have been racist? If he had used the word 'failed states,' would that have been racist? But there are nations that are hellholes in this world. And there are failed states," the editorial says. "It is not racist to say that this country cannot take only the worst people from the worst places and that we want some of the best people from the best places, many of which are inhabited by people of color. That’s not racism, it is reason."

Search Twitter and there are also a lot of allegations from current and former staffers of unethical practices under P-G management, including toning down stories and pulling images that contain photographs of Black people.


I once designed a PG front page and the lead art was for a story on neglected city playgrounds.

I was told not to use the best photo, which showed Black kids playing on one of those playgrounds, because “JR won't like it,” and instead had to use a photo of the empty equipment https://t.co/HaoMopCXdE

One allegation is that Burris softened a story on the Colcom Foundation, a Pittsburgh foundation started by white nationalists that donates millions of dollars to anti-immigrant groups. According to a former P-G staffer, Burris ordered quotes removed from the story where the Southern Poverty Law Center comments about benefactors of Colcom's money. Two of the biggest benefactors, the Federation of Immigration Reform and Center for Immigration Studies, have been deemed hate groups by SPLC, and have been accused of white nationalism. FAIR subsequently shared the P-G story on social media to thank Colcom for its work. In April, SPLC obtained emails that showed two Trump staffers who wrote his latest immigration order halting green cards have ties to both FAIR and CIS.


Burris eventually backed down, but he ordered cuts, removing comments from the Southern Poverty Law Center. Days after the story ran, he convened a meeting of editors and told them the Colcom piece was a "bad story," the kind he didn't want written in the future.

In Burris’ piece this morning, he posed these questions about pulling Johnson from protest coverage:

“Did we fail to fully appreciate what the new civil rights movement means to a young black woman? Did we miss the larger context of all that is happening in our country right now? As we attempted a teaching moment with a young reporter did we miss what could have been our own teaching moment?”

The answer to all of these is clearly yes.

But then Burris followed this up with this: “But no fair person could make the case that our actions were race-based.”

Except if we look at the evidence coming out of the P-G newsroom, we can:


One thing this Keith Burris op-ed does not mention: @alexisjreports & @msantiagophotos were immediately taken off protest coverage for their "biased" tweets, whereas a white reporter was not at first for the same perceived journalistic transgression.

That white reporter was me https://t.co/e78cW7jkFI

So ... it's not biased for a newspaper publisher and executive editor to fraternize with a Republican presidential candidate, who later becomes President of the United States, and to apply conservative bias into editorial decisions that defend that politician and views that align with him.

Just as it's not biased to pull a Black reporter off of protest coverage for a tweet, while not doing the same for a white reporter.

But it is bias for a reporter to tweet a photo about trash in a parking lot and make a joke about looters. Got it.