UPDATE: 12:40 a.m. Aug. 22:
According to the Pittsburgh Department of Public Safety, the officer who shared racist and anti-protest posts on Facebook has been "placed on paid administrative leave until further notice pending the outcome of the investigation" from the Office of Municipal Investigations. The officer in question is George Kristoff, a sergeant in police Zone 5. 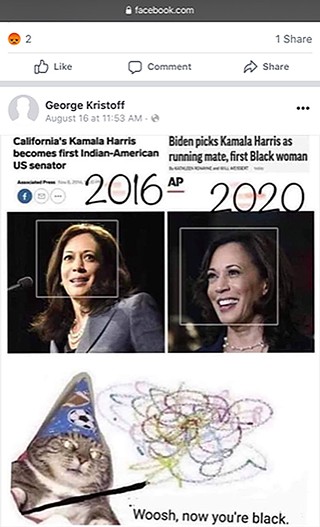 A Facebook post by Pittsburgh Police Sergeant George Kristoff on Sun., Aug. 16, shared with Pittsburgh City Paper
George Kristoff was promoted to sergeant in 2015, according to the TribLive. Pittsburgh City Paper was sent screenshots of some posts Kristoff made this year on Facebook. One, posted on Sun., Aug. 16, includes a meme containing two headlines about Harris. One referring to her as Asian American and the other referring to her as Black, with a caption reading, “Woosh now you’re black.” Harris, born in Oakland, Calif., is both Indian-American and Black, as her mother is an immigrant from India and her father an immigrant from Jamaica.

Kristoff also shared a post on Mon., Aug. 10 from another user that includes a photo of two Black children posing with handguns with the caption, “And they wonder why their kids get shot.”

Cara Cruz, a spokesperson for the Pittsburgh Department of Public Safety confirmed to the Pittsburgh Current that one of its officers shared the posts on Facebook, and said the city’s Office of Municipal Investigations is investigating the matter. 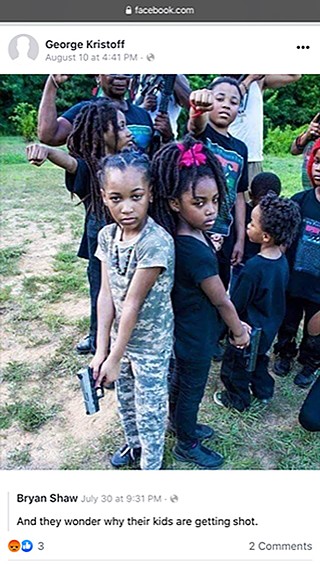 A Facebook post by Pittsburgh Police Sergeant George Kristoff posted on Mon., Aug. 10
“Pittsburgh Police are aware of social media posts made on the personal Facebook page of one of its officers,” Cruz continued. “The Office of Municipal Investigations (OMI) is investigating the complaint.”

Other posts from Kristoff include sharing a right-wing meme criticizing protesters and the Black Lives Matter Movement. One post from July 23 reads, “BLM supporters have now killed more blacks in a month than the police have killed in 35 years. 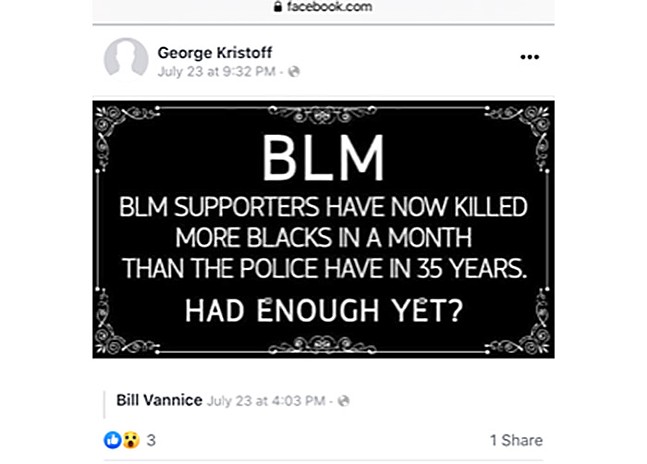 Another post takes specific aim at protesters who march in the street. On Sat., Aug. 15, the same day that a protest marshal who was helping to clear traffic was arrested by Pittsburgh Police officers in an unmarked van, Kristoff shared a meme on Facebook reading in part: “If you don’t want to get hit by a car, don’t protest in the middle of a highway. If you don’t want to be killed by police, don’t engage in illegal activities.”

Pittsburgh Police are tasked with protecting protesters that march in the street, and actually criticized protesters on Sun., Aug. 16 for not communicating more about their protest routes with police. Cruz told the Pittsburgh Current that Kristoff has not been involved at all with any of the recent protests.

Today, Pittsburgh Mayor Bill Peduto announced reassignments in the Pittsburgh Police department in response to criticism over the police using pepper spray and other force against protesters on Wed., Aug. 19. However, no discipline of officers was announced.