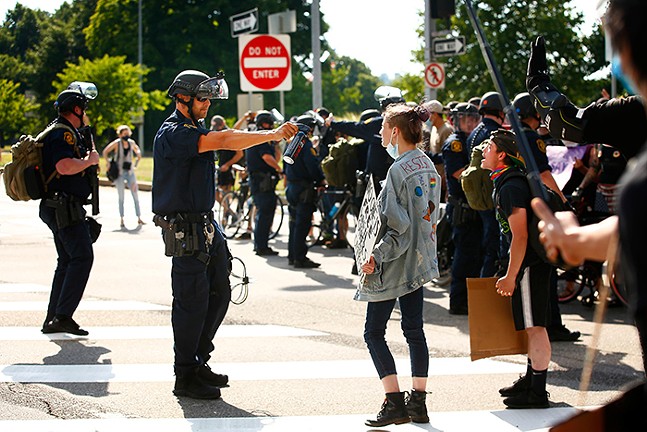 Pittsburgh Department of Public Safety spokesperson Cara Cruz says that less-lethal equipment used by Pittsburgh Police officers is utilized for many situations, not simply crowd control, and that it is normal for the city to place these orders on a semi-regular basis and they often take some time to fill.

"Throughout the year, SWAT, for example, utilizes this equipment for not only emergency call outs which can involve barricade and hostage situations, including some domestic violence calls," says Cruz. "The equipment is also used during search warrant and arrest warrant service."

The April Formal Invitation for Bids also includes rounds of "Breaching Munitions," which are used to top break down doors and other barriers. The last time a Formal Invitation for Bids was put out for less-lethal weapons by the city of Pittsburgh, was in March 2019, which was only for less-lethal shotgun equipment, according to the city's website.

The Formal Invitation for Bids is looking to solicit bids between April 14-22 for a contract lasting from May 1, 2021 through April 30, 2023 with “two, one-year options to renew at year two pricing.” It includes 122 line items, with the vast majority of them being for less-lethal weapons.

This request for less-lethal weapons stock comes as the Pittsburgh Police department is preparing for potential unrest from the conclusion of the trial of Minneapolis police officer Derek Chauvin in the killing of George Floyd. The trial wrapped up its concluding arguments on April 19, and it is expected that a verdict will be reached this week.

Cruz adds that less-lethal equipment has a shelf life, and says "any unused equipment must be discarded of immediately when inventory is being taken."

After Floyd was killed in May 2020, many cities throughout the nation, including Pittsburgh, erupted in protests against police brutality, specifically against Black people. On May 30 and June 1, Pittsburgh Police used large quantities of less-lethal weapons against protesters, including firing sponge rounds, tear gas, and pepper spray on those protesters.

Charges, such as failure to disperse, were filed against protesters on those days, but over 90% of them were initially dropped. Then, earlier this year, several misdemeanor charges were refiled against 16 protesters. The city and the Pittsburgh Police department currently face a class-action lawsuit that alleges the police participated in "escalating a peaceful protest into a scene of pandemonium, panic, violence, and bloodshed."

William Lukas is the communications director for Abolitionist Law Center, a public interest law firm that advocates for several criminal justice and police reform causes. Lukas says the latest request by the Pittsburgh Police is "a proud declaration of the city’s commitment to ongoing state violence — a reaffirmation of funding fascistic militarized terror against Black life and liberation.” He says that officials who oversaw the requests should be held accountable.

“Our movements to defund and abolish police must not only aim to drastically reduce the number of cops on the street — and removing them from schools, mental health crises, and traffic enforcement that have left so many of our loved ones traumatized or dead — but our movements must also seek to explicitly disarm and disempower police,” says Lukas.

The vast majority of the requests are for less-lethal weapons made by Combined Tactical Systems, a weapons manufacturer based in Mercer County. According to reports, Combined Systems, Inc., which makes CTS weapons, has a legacy of workplace safety violations, smell and noise complaints from residents, and low wages. WESA reported in 2018 that workers at Combined Systems, Inc. made less than $10 an hour.

Meanwhile, NBC News reports that Combined Systems' revenue is booming. The company received about $1.7 million in federal government orders for nonlethal weapons between January and June of 2020.