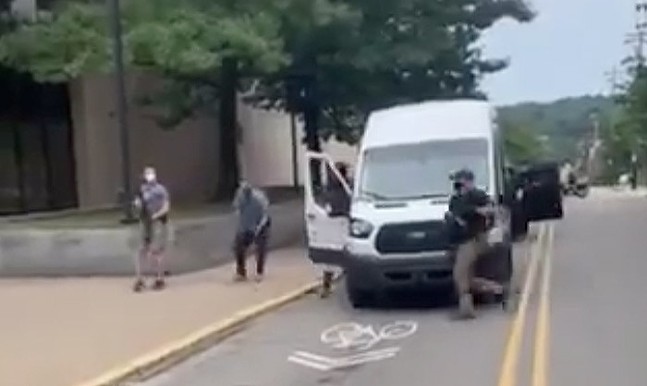 According to the criminal complaint, Matthew Cartier was arrested on charges of disorderly conduct, failure to disperse, and obstructing highways. Police claim that Cartier's actions of breaking out of the march to ensure traffic didn’t impede or confront the about 150 marchers was startling to drivers at several intersections. Police say they have body camera video of Cartier blocking intersections.

It has become a common occurrence for some protesters to direct traffic during protests, to ensure that marchers do not get in confrontations with drivers. For many protests, police had ridden on motorcycles ahead and behind protests to clear traffic since crowds are typically large enough that they walk on the streets. When police don’t help clear traffic, protesters, like Cartier, usually attempt to clear traffic themselves. Yesterday, protesters marched from Shadyside to Oakland, mostly along Fifth Avenue.

"Cartier's actions caused motorists to stop suddenly and safely, causing annoyance and inconvenience to the entire neighborhood," according to the criminal complaint.

The complaint alleges that an officer told Cartier to leave the intersection and stop blocking intersections, according to WTAE. Cartier reportedly refused after being asked twice by police.

But a tweet thread by Cartier tells a different story. He says he approached the van to give officers directions, and was grabbed and then multiple plain-clothes officers “sprang out of the back of the van heavily armed to arrest me.”

A video shows multiple men, who appear to be police officers, carrying rifles and returning to an unmarked white van before it drives off. Some officers appear to pick up something dropped by Cartier.


@billpeduto’s gestapo is disappearing protesters right off the streets. Unmarked vans filled with plain clothed thugs armed with assault rifles who refuse to identify themselves. Notice that some of them level their rifles at unarmed protesters.#PittsburghProtests pic.twitter.com/O75qKkZmUc

A protester who was at the march and witnessed Cartier taken away in the white van confirms that Cartier approached the van first, and then very shortly after, police exited the van to apprehend Cartier and pull him into the van.

“They all had guns pointed and drawn, and they grabbed him and put him in the van and drove off on the sidewalk,” says the protester who spoke to Pittsburgh City Paper on the condition of anonymity.

In a video, protesters can be heard shouting, “We need help,” as the white van drives off on the sidewalk. 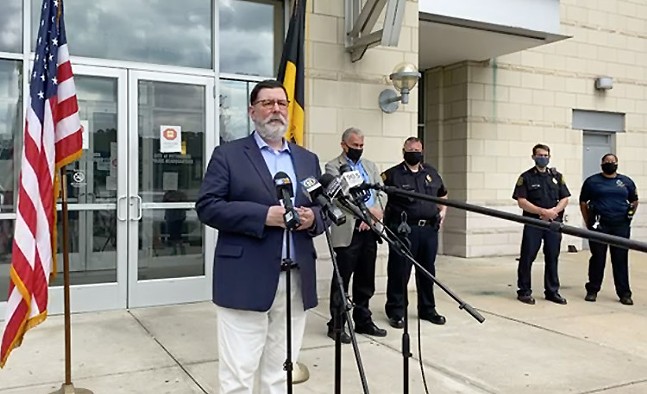 Screencap of Mayor Bill Peduto addressing Saturday's events during the City of Pittsburgh's live press conference on Sat., Aug. 15, 2020.
During a press conference today, Pittsburgh Police officials claimed that they attempted to communicate several times with Cartier, but he refused, which conflicts with his account that he was giving directions to officers in the van.

Police claimed that a bigger problem was that protesters, particularly those organizing Civil Saturdays protests like yesterday’s, are not communicating with police beforehand about planned protest routes.

“The unwillingness of protest organizers to consult with police about the planned protest route is putting protesters in danger,” said Pittsburgh Public Safety director Wendell Hissrich.

According to the ACLU, protesters do not need a permit to march in the streets, as long as marchers don’t obstruct car or pedestrian traffic. If protesters lack a permit, police officers can ask people to move to the side of the street or sidewalk for safety reasons.

However, several protests in Pittsburgh that have blocked traffic have been undertaken, without protesters being arrested for obstructing traffic. In a tweet last night, Pittsburgh Mayor Bill Peduto said that “the right to assemble is a guaranteed right, the right to shut down public streets, is a privilege. That privilege is sanctioned by laws and codes.” Peduto added that he worked with the ACLU to write those codes.

But, the ACLU of Pennsylvania said in a statement that, based on eyewitness accounts, the arresting officers were in clear violation of their own guidelines.

“According to those who were there, the law enforcement officers involved made no effort to work with protest leaders to clear the area and gave no clear dispersal order,” says ACLU of PA legal director Witold Walczak in a statement. “Instead, they tricked a protest leader to approach them and then whisked him away. The ACLU of Pennsylvania has never suggested that the snatch-and-stash arrest of a peaceful demonstrator is ever acceptable.”

Allegheny County public defender Lisa Middleman announced today that she is representing Cartier. She tweeted that today's press conference "deflected from the wrongful arrest's dangerous and unconstitutional nature" and that she is "disturbed by leadership's failure to admit the errors in judgement and tactics that are designed to have a chilling effect on the exercise of civil liberties and constitutional rights."


I'm very disturbed by this and I'm looking into it. Why was the person pulled into the van like this? Why was the van unmarked? And why are the police heavily armed? This looks totally unacceptable from what I'm seeing here. https://t.co/EJ5YyV0HYo

During today’s press conference, Pittsburgh Police dispute what the ACLU said. Pittsburgh Police commander Ed Trapp said police’s concern was that the protest would block access routes to local hospitals in Oakland. Trapp said Cartier was warned several times and asked to move the protesters 25 feet back, and was approached on Fifth and Craig about concerns about ambulances getting through to hospitals in Oakland. Hissrich claimed a recent protest near the Birmingham Bridge blocked a medic unit.

1Hood Media, which has been active in dozens of Black Lives Matter protests since May, tweeted today that protests never block ambulances and let them through.

“The lie was started during the Antwon Rose protests to justify curbing down on the rights of the organizers,” tweeted 1Hood. “The lying must end.”

Cartier was arrested after the march had passed by Fifth Avenue and Bouquet Street. Trapp said the use of the unmarked vehicle was to conduct a “low-visibility arrest,” so as to not escalate the situation with the other protesters.

Peduto said he saw the video of the event and received information on the arrest from officers. He said he has serious concerns about how the arrest occurred, and that things like using plain-clothes officers and unmarked vehicles to arrest people would be examined. He mentioned a city report about policing would be published on Labor Day, and that the city would potentially look into reviewing these arrest tactics after that.

“I was very uncomfortable, just to be honest,” said Peduto. “I saw it like anybody else saw it. ... Plain clothes officers in an unmarked vehicle arresting somebody through a pop-out. And, I let leadership know of my concerns today.”

Pittsburgh Police Chief Scott Schubert acknowledged that people who saw the video are rightly worried about the situation looking like what happened in Portland, Ore., where federal officials arrested protesters in unmarked vans. These arrests were carried out only by Pittsburgh Police, and Schubert said officers had visible badges, and identified themselves as police during the arrest.

“That was a calculated movement that was done to remove somebody from the event and make sure that everything was safe when that protest moved on, so that was never our intent,” said Schubert, referring to the fear the video might have caused to Pittsburghers. “I just want people to know that that's not who we are, that's not how we operate to try to do that.”

But the police also appeared to conflate their message of the reasoning of the arrest. Police said that protesters were not communicating to them beforehand about the planned route for the protest, as some protesters have done in the past. They criticized the Civil Saturdays protesters, who are specifically calling for police reform like changes to use of force laws, for not providing communication. (Last month, a protester was pushed to the ground by a Pittsburgh Police officer during a Civil Saturdays protest).

But at the press conference, police also claimed that the people getting arrested are not part of the main protest groups, who they say are virtually always peaceful. “There's a small group that really isn't part of the protest group,” said Trapp. “They're usually all dressed in black. Yesterday, the color of the day announced by the folks as yellow, and they were all dressed in black and they're the ones that seem to be coming increasingly belligerent towards civilians.”

Of all the protesters arrested during the ongoing Black Lives Matter protests, about 90% of them have had all of their charges dropped.

Peduto also joined into this claim saying, “It's people who join with them that have other intentions,” in apparent reference to protesters who have been arrested. “They are from side organizations,” said Peduto.

But Cartier is a Pittsburgh resident and a tech worker who has been at several Pittsburgh protests, sometimes live-tweeting them on Twitter. After being released from the Allegheny County Jail, Cartier tweeted, “I protest because Black Lives Matter. What happened to me has no doubt happened to Black Pittsburghers without similar amounts of outcry. Let's keep our eye on the ball here and defund these police.”

Some also question the necessity of the arrest in the first place. Magisterial District Judge Mik Pappas (D-Highland Park) said on Twitter that the “most serious” charge against Cartier was a level 2 misdemeanor which state law requires police to release the accused and issue a summons, unless they pose an immediate threat or the officer reasonably believes they will not appear for court.

“Where’s the threat? Did he have ID?” tweeted Pappas.