At last year's Theatre Festival in Black & White — Pittsburgh Playwrights Theatre Company's annual celebration of local writers — Kim El debuted Ubuntu Holiday, her one-act about a family's Kwanzaa gathering. She's since turned the work into a full-length play that Playwrights is presenting (in rotation with Ray Werner's A Christmas Star) through year's end. 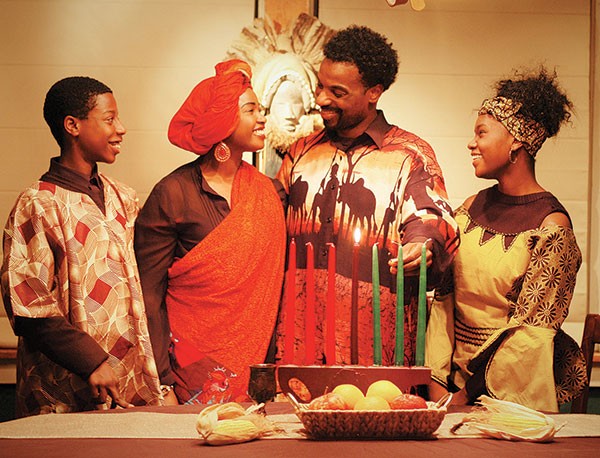 The new version adds a first act set in Jean's home the day before, as she prepares her Christmas celebration, gossips with her daughter and gives us a peek into her world view.

The spirit hovering over Ubuntu turns out not to be African ancestors, Jesus or Santa, but rather the late Pittsburgh playwright Rob Penny, who was famous for creating plays about African Americans exploring their cultural heritage. Penny's desire to educate his audience was always far more important than his desire to entertain. He had a message he wanted to share, and theater was the vehicle.

I do know that El considers Penny a mentor, and that shows in this play. Ubuntu is an educational experience rather than a truly theatrical one, and while much of the information is necessary and interesting, it's also true that the play can feel a bit preachy and stilted. El wisely leavens the sometimes thudding sincerity with flashes of welcome humor and attitude and, as a bonus, there's a rousing musical finale sending you off to whatever holiday tradition you celebrate.

And a happy New Year to all.