We get a very real sense of Poe's writing, the twisted beauty of his prose 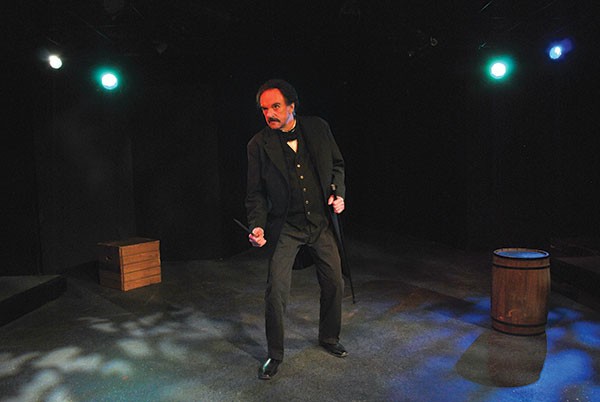 What with one thing or another, I've spent my life around writers. So I can say with authority that if you're looking for the most screwed-up, self-destructive people around, your search can begin and end with them.

And Edgar Allan Poe sits at the top of that list.

Poe was an orphan estranged from his foster family; he was also an out-of-work drunk plagued by gambling debts. At age 28, he married his 13-year-old cousin. By 40 he was dead. Yet in the middle of all that, he churned out some of the most famous poems and short stories ever written.

There's a lot there to theatricalize, and Pittsburgh theater stalwart David Crawford has done just that with Poe's Last Night, a play he wrote and in which he stars for this Pittsburgh Playwrights Theatre production, directed by Monteze Freeland.

Crawford keeps the concept simple. We meet Poe in 1849 Baltimore, where we find him deranged and convinced he's about to be murdered. He rummages through his past, trying to figure out how he ended up there, and who might be trying to kill him. These memories call to mind some of his written work, and he quotes liberally from "The Pit and the Pendulum," "The Cask of Amontillado" and "The Raven."

These segments are, in fact, extended readings of his work. In other hands, the material might be deadly. But they turn out to be the show's highlights, thanks to an incredible soundscape by Mark Whitehead, Freeland's specific direction and Crawford's commanding voice and intelligence. We get a very real sense of Poe's writing, the twisted beauty of his prose and the frightening implications of his subject matter.

The narrative sections of the piece are rewarding as well; Poe led an amazingly misshaped life, and learning some of what he went through is quite interesting. The one problem is that Crawford and Freeland approach these passages with a very cool reserve: Crawford's signature sumptuous voice and energy level is barely ever raised to the frenzied, explosive pitch needed to drive the show.

But I'm not sure if that ultimately detracts from this intriguing evening. So go and enjoy it, and thank your lucky stars you never wanted to be a writer.