This edition is particularly youthful and includes some strong work. 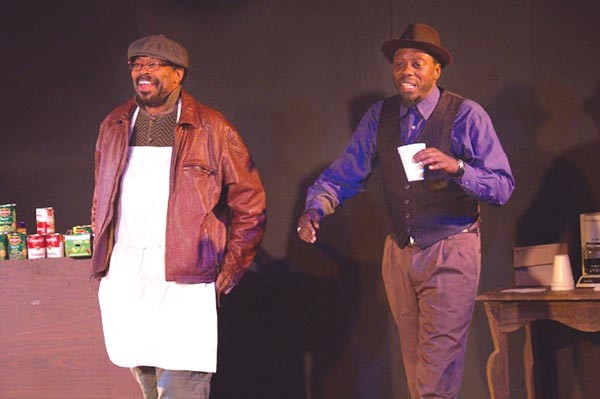 A decade ago, Pittsburgh Playwrights Theatre Company had a wild idea: Why not solicit short scripts from black and white dramatists, then have the plays directed by members of the "other" race? Pittsburgh gushes theatrical talent, African American and Caucasian — and these people rarely meet across color lines.

The Theatre Festival in Black and White is not, in practice, a superlative event. The sets are basic, acting abilities are varied, and some scene changes are nearly as long as the plays that follow. Nearly every one-act seems under-rehearsed, some plotlines are painfully didactic, and some performances are downright boring.

But quality isn't the point, as much as we may desire it. The point is to integrate artists from different backgrounds, and in this role, the festival has been a vital force for nine seasons, forging powerful relationships that would never have existed otherwise. This edition is particularly youthful and includes some strong work, offering hope that a new generation of cross-ethnic artists is gestating.

The program consists of two alternating programs, A and B.

"The Tool": A student describes his professor as a "tool." The term is new to the prof, and he dwells on its implications. Mike Schwartz's script is gleefully bizarre, like an SNL sketch with a Dostoyevsky twist.

"The Vows": Playwright Devonne Goode shows a groom (with best man) and bride (with maid of honor) hashing out their last-minute vows. Sentimental and good-humored, "The Vows" is also beautifully performed by four fine young actors. Kudos to Kaitlin Mausser for tight direction and smart transitions.

"Diseased": It's not easy to tell an Edwardian werewolf story, but Eva Diodati pulls it off. The most eccentric one-act is also one of the most engaging: Dr. Bertram (Andy Kirtland) visits a murderess in a British asylum (Lissa Brennan, who also directs), hoping to exploit her for a dissertation. Is she mad? Is she actually lycanthropic? Diodati's moody tale asks what it means to be different — really different.

"Styrofoam Cup": Nuclear or wind power? Playwright Judy Meiksin debates this topical issue through a driven young woman and her grandmother. The play is well researched, but there is neither action nor character. It's like two canvassing brochures shooting each other with bullet points. What this play needs is some energy.

"Bridge City": A pixie-ish young woman (Felicia Cooper) plans to leap from a bridge, but a know-it-all guardian angel (Harrison Single) gives her sage advice — as to how to best "execute" her jump. Ted Elrick's script is an homage to Steel City spans and a tribute to life. Despite decent acting and good intentions, the play is much too long, and you may secretly hope they both take the leap.

"Perception": Alexis Payne's short play is a painfully awkward dissection of race and expectations. Weighed down by abstract language, "Perception" is a shining example of why raw post-colonial theory doesn't make for riveting theater, even if the themes are prescient.

"The Home Stretch": Two old women bitch about their final days in a retirement home. Les Abromovitz relies on his mastery of Jewish wit, but despite some funny moments, the story goes nowhere and becomes a sort of tsutcheppenish.

"Casual Fridays": The moment we see (a) an African American, (b) a guy in a suit and yarmulke, and (c) a cyclist wearing a head-scarf — all waiting in a subway station — we know exactly where this is going. Unfortunately, so does almost anyone who gets racially profiled when somebody finds an abandoned bag. Playwright Pat Golden critiques our paranoid zeitgeist, but in the end, there are no answers. If you were cryogenically frozen in early 2001, "Casual Fridays" is full of surprises.

"Redneck Revenge": When a racist old man dies, his children are shocked to discover that they have two African-American half-siblings. Or do they? Playwright Ray Werner is no Mel Brooks, and although his point is well taken, it's blunted by bland humor.

"Comfort Zone": Marlon Youngblood's drama (directed by Mark Whitehead) opens with startling intensity: Checkers owns a corner store, and he may have ratted to the cops about some local thugs. After 40 years, neighbors and friends air their grievances with Checkers, who only wants the gang violence to end. In the end, the magnificent dialogue deflates, and the actors — an unusually accomplished bunch for this festival — seem to give up. Still, it's always great to see festival founder Mark Southers onstage; Edwin Gibson is strong as Slick Atkins; and Tony-winner Anthony Chisholm is a treat to watch as Checkers.