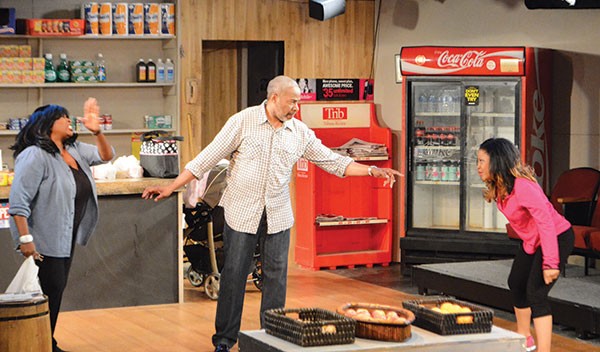 continues through Sat., May 24.

There's a great deal of pleasure to be had from Marlon Erik Youngblood's Comfort Zone, at Pittsburgh Playwrights Theatre Company.

Foremost is Playwrights' nurturing of this local playwright and his play. Comfort Zone debuted as a one-act in the company's 2012 Theatre Festival in Black & White, and now appears in a full-length version.

The play opens the morning after two young man have fought — and one died — in a Pittsburgh corner store. The community is on edge, with everyone wondering whether the proprietor, Checkers, has "snitched" to police about the murderer's identity.

Checkers has spent the past several decades going along to get along, cultivating friends and avoiding creating enemies ... but with this death, he's wondering whether having lived his life in that "comfort zone" has harmed the neighborhood around him. He remembers a time when people in this predominantly African-American community looked out for each other, and he sees, for the first time, how far people have slipped from that ideal. He must choose to speak up or disappear into insularity.

Youngblood is a good old-fashioned storyteller, and in his first act especially, it's a joy to watch him work; the characters are finely drawn and the plot moves forward with a compelling logic.

I have to say that Comfort Zone goes a bit haywire in the second act. Here Youngblood can't resist the temptation to get a bit preachy, and his plot suddenly feels stagey and muddied.

But, like PPTC, I can see that this playwright has considerable talent, and that his is a voice that needs to be heard.