The evening was a yinzer’s wet dream full of Pittsburgh doing Pittsburgh things.

The Icetime program cover featured four of the team's star hockey players in pop art colors in homage to Pittsburgh native Andy Warhol’s famous silkscreen prints of Marilyn Monroe, which was a super cute introduction to the night, even if the men looked a bit like monsters from B-movie horror flicks. (The graphic artist decided to forgo adding makeup, like in the original Warhol prints, which would have added much-needed additional hues to their faces.) 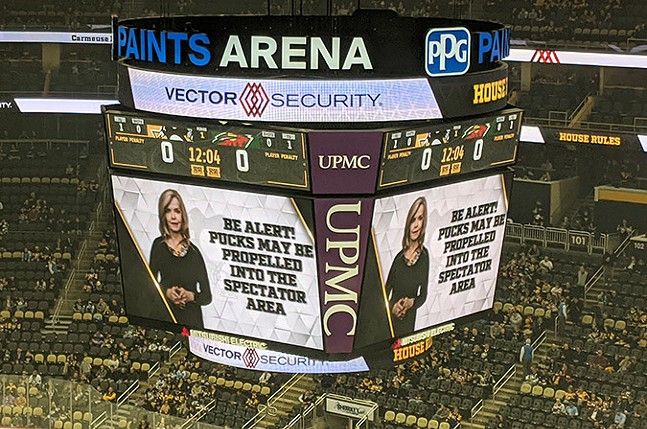 Joining Pens mascot Iceburgh on ice for the trippiest T-shirt throw in the history of T-shirt throws was every regional mascot you can imagine: The Pirate Parrot, Fiddlesticks from The Pittsburgh Symphony, Andrew Cardnegie from the Carnegie Library of Pittsburgh, Robert Morris University’s colonial dude who I kept mistaking for Steely McBeam ... The list goes on and on and for some reason also includes the Sinkhole Bus (which I'm hoping isn't Port Authority of Pittsburgh's new mascot, considering that a news story just broke on Tuesday morning of a different sinkhole bus killing at least six people in China).

The Pens even scored one of Pittsburgh's all-time favorite bands, The Clarks, to play songs in between periods with a bonus post-game concert.

But some of the most Pittsburgh! (exclamation mark mine) things during the evening didn’t even have anything to do with the official theme night:

CP photo: Lisa Cunningham
Fans leave the arena after the Pittsburgh Penguins win against the Minnesota Wild.
1. Pittsburghers love holding onto the past: You still can’t go to a Pens game without seeing a Phil Kessel jersey, even though he was traded last June. Or a Fleury jersey, and he's been gone since 2017. Or name anyone else who was traded from the team in recent years. Sure, some of the fans probably just didn’t want to give an old jersey to Goodwill when they paid good money for it, but based on the amount of times the season ticket holder behind me has shouted out, “Pass it to Phil!” during recent games, I don’t think that’s the only reason.

2. Pittsburghers love large servings: Have you seen the size of those overflowing plates of nachos? Or the 24 fl. oz. cans of Truly? I love hard seltzer as much as the next person, but no one ever needs 24 fl. oz. of Wild Berry Truly. (OK, confession: I did buy one once — I am admittedly a Pittsburgher, but I could only get through half of it, so I speak from experience.)

3. Pittsburghers love to tell you how much they love Pittsburgh: Every game is a competition to see who can yell “Let’s go Pens!” the loudest because that will surely mean everyone around them will know that they are clearly sitting near the biggest Pens fan in the room so don’t even try to pretend like you like the team more than they do. (Side note: Why is the winner of this competition always sitting near me?)

4. Pittsburghers don’t like traffic: It’s the only reason I could possibly give for half the arena leaving their seats with 10 minutes still left to go in the game. Sure, the Pens were ahead, but come on: It was a really good game! And The Clarks were playing a post-game concert too, so I guess as much as Pittsburgh loves The Clarks, they love getting their car out of the garage before anyone else even more.

CP photo: Lisa Cunningham
Sid the Kid's return announced on the big screen
5. Pittsburgh loves its champion: In the world’s most perfect timing, Pens captain and star Sidney Crosby returned to PPG Paints Arena last night after missing 28 games for medical leave. Crosby’s smile on the big screen after he scored a goal? It lit up the entire room, and the arena jumped to its feet and burst into applause. A "Crosby Crosby Crosby" chant spread through the arena shortly after. No clever marketing team could ever plan something better than Crosby returning to the ice on Pittsburgh! Night to help the team land a 7-3 victory. And if Sid the Kid ever leaves the team? (I mean if he retires. Of old age. Many, many, many years from now.) I wouldn't be a true Pittsburgher if i didn't join the rest of the city in shaming you if the thought of getting rid of that Crosby jersey even crosses your mind.