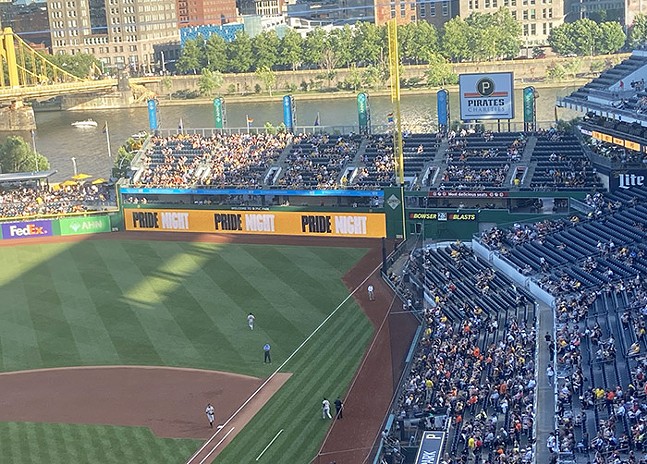 PNC Park was filled with both Pittsburgh Pirates logos and rainbow-colored flags on Friday night as the baseball team welcomed the LGBTQ community to its annual Pride Night.

As soon as fans walked through the gates on June 17, they received a free Pride-inspired Pirates T-shirt and were greeted by notable additions to the ballpark. Along the riverwalk, visitors could attend a resource fair, featuring 10 nonprofit organizations benefitting Pittsburgh's LGBTQ community.

Progress flags were hung throughout the stadium, as well as Pride-themed Pirates logos. (The Progress Pride flag, developed in 2018 by nonbinary American artist and designer Daniel Quasar, celebrates the diversity of the LGBTQ community and calls for more inclusivity.)

Carrie Tongarm, a Sharpsburg councilor and a member of the LGBTQ community, attended the game with her two children and was very excited about the event.

“Having a pride night at PNC Park means everything,” says Tongarm. “When I was a kid, you did not have this stuff.”

Throughout the night, PNC Park was filled with music by members of the LGBTQ  community including award-winning musician Lil Nas X.

Tongarm says she likes the direction society, and the Pirates, are heading when it comes to acceptance of the LGBTQ community. However, she says work still needs to be done.

“My kids are having conversations about this in schools that I never had,” says Tongarm. “While this is a step in the right direction, I think that there is a lot of room for improvement and growth.”

In addition to welcoming the LGBTQ community to enjoy the game as fans, Tongarm hopes that the organization will welcome them as members of the team as well.

“Historically, sports have been one of the more segregated organizations. We have made some strides,” says Longarm. “Title 9 helped, and we are now seeing more women in sports organizations. Being able to see LGBTQ+ athletes and front office workers at every level of competition would be amazing. It would be great for young LGBTQ+ athletes coming up in the world.”