“It’s so important to know the latest technology out there, and these guys know it.”

Chances are good that Evan Mascitti, the field-operations supervisor for the Pittsburgh Pirates, has heard your “grass is greener on the other side” jokes.

“I don’t mind them,” he says with a chuckle. “Even my family jokes about it.”

Part of his job is making sure the grass at PNC Park is kept at the correct height, down to the quarter-inch, all year round. Aerating the soil, what type of fertilizer to use, and how much and how often the grass is cut are the kinds of things fans notice only when something’s wrong. But it takes a lot to get everything just right.

Last week, while the Pirates were in New York playing the Mets, Mascitti and the rest of the grounds-crew team hosted their counterparts from area school districts and municipalities to show them some tricks of the trade.

Matt Brown, PNC Park’s director of field operations, led the meeting of about 50 people. The event was sponsored by power-management company Eaton Corp., the company that replaced the lighting at PNC Park with an LED system earlier this year.

“It’s a small industry. We’re all facing the same challenges, as far as weather and events, and playability on our fields,” Brown said. “We’re happy to help if we can.”

The tour of the ballpark included a look at everything from the proper consistency for the clay along the warning track, and maintenance of the pitcher’s mound, to what kind of rake to use on the warmup area in the bullpen and the right settings for lights at various spots around the park.

The lighting can be changed in the dugout, for instance, using a smartphone, and can be adjusted based on the event or the time of day.

John Tucci, athletic director at Robert Morris University, appreciated how easily the information the grounds crew was sharing applied to all types of recreational fields, not just baseball.

“What you apply to baseball, you can apply to the soccer fields or any type of field,” he said. “It’s so important to know the latest technology out there, and these guys know it.”

Mascitti said the grounds crew is careful about what products it uses, even as it tries to keep the grass as green as possible as long as possible. He said it’s important to the crew to use minimal fungicides and other chemicals treating the field, given PNC Park’s proximity to the three rivers. “We take that very seriously,” he said. 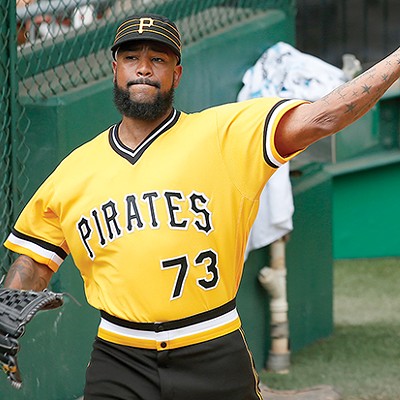