Pittsburgh physical therapist and Pitt professor to compete on Jeopardy! 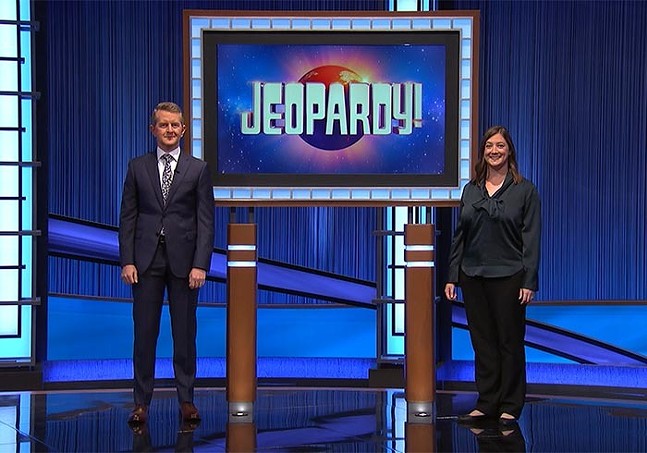 Photo: courtesy Jeopardy Productions, Inc.
Ally Bove (right) with host Ken Jennings
Ally Bove is an Assistant Professor at the University of Pittsburgh School of Health and Rehabilitation Sciences and a big fan of the Jeopardy! TV show, and on Jan. 12 she will get a chance to live out a lifelong dream and compete on the game show.

In a video posted by Pitt SHRS, Bove explained that watching Jeopardy! was an important part of her relationship with her grandparents. “I grew up around the corner from my grandparents and they owned the little mom and pop store, like a corner store,” Bove said, “and it usually closed around the time that Jeopardy! and Wheel of Fortune came on every day. I finished dinner with my parents, and I’d run down through the woods to my grandparents’ and we would watch them together.”

She especially admired her grandfather’s wealth of knowledge, which was largely self-acquired after he left college to serve in World War II. Bove said, “He was so well read, he knew all the answers … so I just always aspired to have all of that knowledge.”

Bove had been trying to get on Jeopardy! as a contestant for ten years, she said, and completed the interview process twice before without success. This time, when she got the call that she had been selected for the show’s 38th season, she immediately started studying. Unfortunately, she said with a grin, “Exactly zero of the things I studied came up in my game.”

She said she enjoyed the experience of filming the show, although it involved a lot of waiting. “You spend most of your day either in a parking garage or in the Wheel of Fortune studio, which is where they hold you when the Jeopardy! studio isn't ready for you,” Bove said. She also became good friends with her fellow contestants, she recalled.

Jeopardy! is in its 38th season of syndication and its first season after the death of beloved long-time host Alex Trebek. Bove isn’t the first Pittsburgher to compete this season. Gabby Kim competed in the September 2021 season premiere, and Carlo Anguili also competed that same month.

You can watch Bove compete on Jeopardy! on WPXI-TV (NBC) at 7 p.m. Please check your local listing for additional information or visit Jeopardy.com.