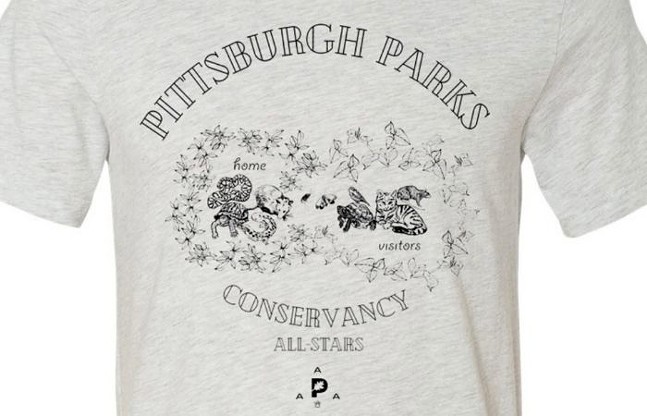 Photo: Courtesy of Pittsburgh Parks Conservancy
Pittsburgh Parks x TripleAAAnimals All-Stars
Whether it’s a Black Rat Snake in Frick Park or a baby alligator crossing the road in West Mifflin, Allegheny County has a variety of animals many people don’t think about — much less encounter — on a typical day.

The Conservancy is dedicated to restoring the park system in partnership with the government and the community. Since December 1996, the nonprofit has raised more than $130 million and completed 22 major park improvement projects, in addition to hosting events and providing programming for children.

“TripleAAAnimals is so thrilled to have this collaboration with the Pittsburgh Parks Conservancy,” says Idia, dubbed the founder and the commissioner of the fictional sports league. “Especially as they celebrate 25 years of service to all the species, human and beyond, in the region. Parks have always played an important role in the life of the city and for me personally, I have come to rely on the Parks in Pittsburgh even more as key to my own self-care.”

The Conservancy shirts feature five native species on the “Home” team and five invasive species on the “Visitors” team. The home team represents a variety of species, from the Hellbender showing up for amphibians to the Eastern Milksnake and Eastern Box Turtle competing on behalf of reptiles. The Common Eastern Firefly, Virginia Opossum, and Azalea-rhododendron round out the home team.

The visiting team also has some reptile representation with the Red-Eared Slider turtle, but it has more flying fauna with the English Sparrow and Spotted Lanternfly that might give the visiting team an aerial advantage. The common rat and domesticated cat also appear on the visiting team roster, having apparently set aside their differences for the season. Knotweed, or Fallopia japonica, made its way from East Asia for the occasion.

The design launched on August 21 at a love, Pittsburgh popup and is now available to purchase for $35 in gray or light blue. All proceeds will go towards the Pittsburgh Parks Conservancy as well as the designing artist.

The All-Stars design was created by Tremonte, who says her creative practice is "rooted in drawing, printing, learning from and celebrating my affinities with animals, plants, and mycelia." She will continue to work with the Pittsburgh Parks Conservancy on other designs that will drop over the next three months leading up to the 25th anniversary of the Conservancy in October.

“Developing deeper relationships with land has been an intrinsic support through this past year especially, and this collaboration is a real dream team," says Tremonte.