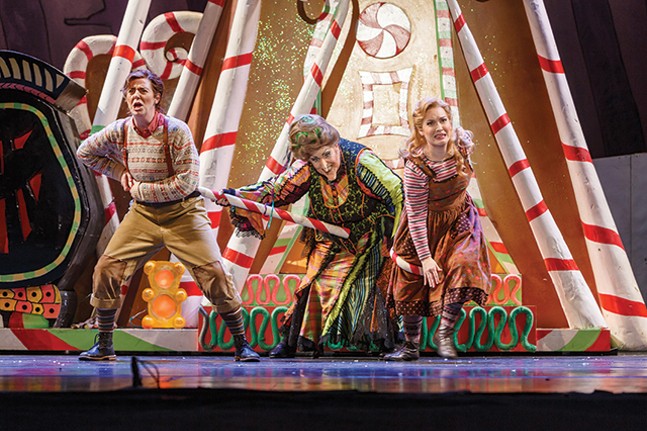 When the curtains are pulled back for Pittsburgh Opera’s Hansel & Gretel, it’s as if someone has opened the pages of a children’s pop-up book. The set design is minimal, but effective: a crooked house, a forest full of cut-out trees. From the very beginning, there’s no mistaking this is a fairy tale.

This rendition of the classic story, first composed by Engelbert Humperdinck in the 19th century, opens with siblings Hansel (Corrie Stallings) and Gretel (Ashley Fabian) goofing off, avoiding chores. These are poor children, singing funny songs about being hungry. It’s a heavy subject, starvation, but the actresses — yes, both Hansel and Gretel are portrayed by women —play up the silliness, and the mood stays light.

Then their mother (Leah Heater) comes home and catches them disobeying orders; a jug of milk is broken — their dinner spilled! — and she sends them off to the forest to forage for food.

Their father (Craig Verm) comes home soon after, he’s drunk but jovial, and carrying plenty of food for everyone to eat. The chemistry between the two parents is a joy to watch, and Verm’s playful rendition a delight. But when he realizes the children are gone, he sings of the dangers of the witch in the woods who eats children, and the two rush off to find them.

The bulk of the story follows the children on their journey. Their songs, while performed in English, had subtitles above the stage and at times, proved necessary. The vocals, while pleasant, were often overpowered by the brilliant orchestra. It was apparent some of the audience was reading along, as laughter occasionally erupted from the seats before the lines were sung.

Humperdinck’s opera is based on the Brothers Grimm fairy tale, but this plot has some twists. A majestic scene brings glitter and fog to the stage, along with some surprise characters that are sure to be appreciated by a younger audience.

The true standout performance of the evening, however, was undoubtedly Marianne Cornetti as the witch. She doesn’t sing until the third act, but with just a strut across the stage early on, she receives gasps of joy from the audience.

When the children finally make their way to her gingerbread house, Cornetti is radiant. Her whimsical portrayal of the witch is worth the price of admission, her over-the-top dramatic gestures the perfect fit for a fairy tale villain.

One solemn note: on opening night on Saturday, the evening began with the orchestra playing Verdi’s “Va, pensioro,” the “Chorus of the Hebrew Slaves,” in memoriam to the victims of the Tree of Life synagogue shooting. The music echoed throughout the still room, with the faint sound of some audience members, encouraged to sing along if they so wished, paying their respects through song. Afterward, a moment of silence. An appropriate touch for anyone who might feel guilty for enjoying a night out after the tragedy.

“War and its aftermath” in Pittsburgh Opera’s A Long Walk