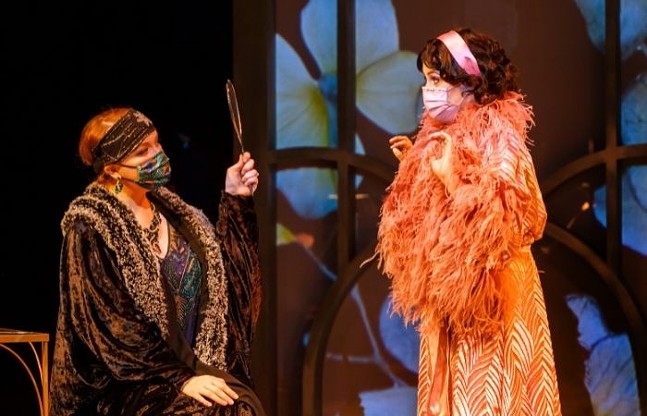 Photo: David Bachman Photography
Pittsburgh Opera gives a Roaring Twenties spin to Handel's 1743 opera Semele
While many venues shut down in-person events and productions in 2020 as the pandemic spread, Pittsburgh Opera continued to perform in front of live, indoor audiences. At the time, each performance was livestreamed and made available for two weeks.

Now, Pittsburgh Opera is re-releasing the livestreams from its 2020-21 season for two nights each, starting with Semele on Thu., Aug. 26 and ending with Charlie Parker’s Yardbird on Thu., Sept. 2. The season also includes productions of Così fan tutte and Soldier Songs. The livestreams will be free to watch and will include never-before-seen introductions from feature cast members.

All livestreams will take place on Pittsburgh Opera's YouTube channel.

The season includes a mix of centuries-old operas with new twists, along with operas by contemporary composers. Semele, a 1743 opera by George Frideric Handel, adapts a Greek myth about the title character seeking the god Jove, or Jupiter, as a lover. Sung in English, the production reinterprets the story in a 1920s Art Deco style, complete with sumptuous costumes and matching masks.

The schedule continues with Wolfgang Amadeus Mozart's Così fan tutte, another classical opera, available Sat., Aug. 28 and Sun., Aug. 29. With libretto by Lorenzo DaPonte, the 1790 comedic opera follows two young men as they test the faithfulness of their fianceés — with the help of a friend who’s trying to win a bet about the fickle nature of women. The performance is sung in Italian with English supertitles above the stage.

The season takes a contemporary turn with David T. Little's 2006 opera Soldier Songs, a work based on interviews with veterans of five wars, and featuring 11 songs that explore a range of emotions, from rage to fear to joy to grief. The show will be available Mon., Aug. 30 and Tue., Aug. 31.

Charlie Parker's Yardbird, a 2015 opera by Daniel Schnyder and libretto by Bridgette A. Wimberly, closes the season. The performance imagines the postmortem adventure of saxophonist Charlie “Yardbird” Parker, who passed away in 1955, as his ghost struggles to complete his final masterpiece before his body is identified in the morgue. The livestream will be available Wed., Sept. 1 and Thu., Sept. 2.