What’s on deck with this opera about baseball? 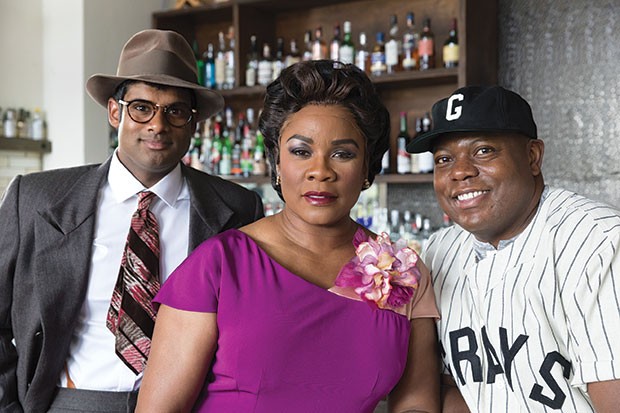 Yet art, and history, might well bat last when Pittsburgh Opera makes The Summer King, about Negro Leagues great Josh Gibson, the very first world premiere in its 78 years, with four performances April 29-May 7 at the Benedum Center.

Gibson, born in 1911 and raised partly in Pittsburgh, starred at catcher, mostly for the Homestead Grays and Pittsburgh Crawfords; his National Baseball Hall of Fame plaque credits him with “almost 800 home runs.” While statistics from the Negro Leagues and the era’s barnstorming tours are notoriously incomplete, “the black Babe Ruth” is routinely ranked among the game’s greatest sluggers. He died of a stroke at age 35, in 1947 — three months before Jackie Robinson broke Major League Baseball’s color line.

The tragedy of that lost opportunity struck life-long baseball fan Daniel Sonenberg, a teacher and resident composer at the University of Southern Maine who started writing the opera, his first, in 2003. He set it aside until 2013, when Maine-based arts group Portland Ovations commissioned its completion. (The libretto is credited to Sonenberg and Daniel Nester, with additional lyrics by Mark Campbell.) In 2014, Pittsburgh Opera general director Christopher Hahn saw scenes at a workshop production. Hahn, born in South Africa, is not baseball-literate, but his intrigue grew after he started asking people in Pittsburgh who Gibson was. “Everyone knew,” he recalls.

Pittsburgh Opera has long staged contemporary operas — Jake Heggie’s Dead Man Walking; Ricky Ian Gordon’s The Grapes of Wrath — alongside favorites like La bohème and Aida. But most opera companies find producing outright world premieres too risky, Hahn says: Traditional audiences don’t always like them. Hahn says Summer King was worth taking a chance on because of the local connection, the larger-than-life quality of sports stars in our culture, and the tragic dimensions of Gibson’s story. “It’s the ideal canvas for an opera,” says Hahn.

Summer King frames Gibson’s story with opening and closing scenes in a barbershop in 1950s Brooklyn, where a former Negro Leagues player who’s now a barber recounts Gibson’s legend — he once knocked a pitch clear out of Yankee Stadium! — for the young ’uns. The story moves from Gibson’s early baseball success to his young wife Helen’s death while giving birth to twins; his triumphs playing ball in Mexico; and the illness and alcoholism that laid him low. Though spurred by both his girlfriend, Grace, and Pittsburgh Courier sportswriter Wendell Smith to aim for the major leagues, Gibson is characterized as largely content to stick with what he knows. “I got my own league,” he sings. The two-hour, three-act work even includes a baseball game (of sorts), complete with trash-talking.

Sonenberg’s music for Summer King is far from traditional opera. The composer — who also drums with his indie rock band, Lovers of Fiction — says early versions of this, his first opera, were in the musical style of contemporary American opera. Feedback from workshop performances convinced him to blend in styles alluding to the time and place of the story. But the jazz and mariachi music, for instance, are not included revue-style. Rather, he says, they’re woven in allusively, with the melodicism of some passages complemented by dissonance elsewhere, when appropriate. Walker praises the score’s eclecticism: “There are a lot of really cool jazzy parts in there that really make you want to move when you listen to it.” Nor is this an easy score: Walker calls it “rangy” — lots of high notes for a bass-baritone like him — and Sonenberg notes on his blog that Graves playfully chided him for the challenging vocal rhythms.

Sonenberg, interviewed at Pittsburgh Opera’s Strip District headquarters in the midst of rehearsals, says he worked hard to ensure fidelity to the key facts of Gibson’s life. (Sources included Sandlot Seasons, the 1987 book by Pittsburgh-based historian Rob Ruck.) Sean Gibson, executive director of the Pittsburgh-based Josh Gibson Foundation, says it was a decade ago that Sonenberg first contacted him with the surprising news that he was composing an opera about his great-grandfather. He and his family were initially skeptical. But Gibson now says, “It’s very exciting. It will bring more awareness to Josh, to the Josh Gibson Foundation,” which promotes athletic and academic development for youths.

Sonenberg acknowledges that his opera’s takes on Josh Gibson’s inner life are pure speculation: “We don’t really know how Josh felt about any of the things that happened in his life.” And while a key scene depicting Gibson being disingenuously interviewed for a job by the owners of the Washington Senators is fictional, Sonenberg included it to illustrate the complexity of ending segregation in baseball: It also effectively meant ending the Negro Leagues that were such a source of pride (and revenue) in the black community.

Sean Gibson gives Sonenberg good marks for factual accuracy, and adds that Sonenberg was “very receptive” to factual corrections to the libretto offered by the Gibson family. (Josh Gibson’s surviving relatives include a niece and a daughter-in-law.)

Whether audiences for traditional opera will embrace Summer King is one question. Another is whether a mostly Pittsburgh-set work about a local sports hero can attract new audiences to opera.

One barrier is simply the label “opera,” which scares off many. Gibson says that in encouraging folks in the black community to attend, he chooses his words carefully. “I say, ‘It’s a musical,’” he says.

Hahn says the Opera has been promoting Summer King through its Breaking Barriers program, which works to dispel stereotypes about opera itself: that it’s too pricey (Pittsburgh Opera tickets start at $12); that it’s always sung in another language (Summer King and other works are in English, with supertitles projected above the stage); and that it’s not relatable. In schools and libraries, says Hahn, the programs found receptive ears — some of whom even claimed connections to Gibson’s family or story.

In any case, Summer King already has one big fan: Detroit’s Michigan Opera Theater has announced it will stage the work in May 2018.

As Sean Gibson puts it, “Josh didn’t make history in the majors, but he’s making history in opera.”