Courtesy of Pittsburgh Opera
Carmen
"A carefree Elf witnesses a despicable crime." So goes the tantalizingly odd hook for The Rose Elf, one of the upcoming performances set for the 83rd season of the Pittsburgh Opera. The fantastic production, based on a fairy tale by Hans Christian Andersen, makes for one of the premieres included in a diverse lineup that also features the return of postponed shows.

Running from Nov. 2021 through spring 2022, the 2021-2022 Pittsburgh Opera season will see the company "triumphantly returning to larger venues such as the Benedum Center and August Wilson African American Cultural Center, while also having programming in its own headquarters building and some digital offerings," according to a press release. This is after months of live-streaming shows or restricting performances to the Pittsburgh Opera building, with limited, in-person, socially distanced audiences, due to the COVID-19 pandemic.

“We were proud to be one of the very few arts organizations in the country to have indoor performances for live, in-person audiences last season," says Chris Cox, Pittsburgh Opera director of marketing and communications. "But there’s a difference between performing in front of 50 socially distant patrons in a small theater and performing in front of a packed house at a large venue.”

Cox adds that the company looks forward to returning to the Benedum, and performing at AWAACC for the first time.

Opera fans can look forward to three premieres. These include the Pittsburgh premiere and second-ever performance of The Rose Elf, a show developed through Opera Philadelphia’s Double Exposure program in 2016 and 2018. Cox describes the show as "haunting," perhaps owed to the fact that it premiered in the catacombs of Brooklyn's Green-Wood Cemetery.

Blue, an opera by Tony Award-winning composer Jeanine Tesori and NAACP Theatre Award-winning librettist Tazewell Thompson, will see its Pittsburgh premiere with four performances at AWAACC. Described in a press release as being inspired by contemporary events and Black literature, Blue centers on the challenges faced by a Black couple as they raise their son, only to become grieving parents forced to "navigate the turbulent waters of loss at the hands of police, while seeking answers and support from their church." 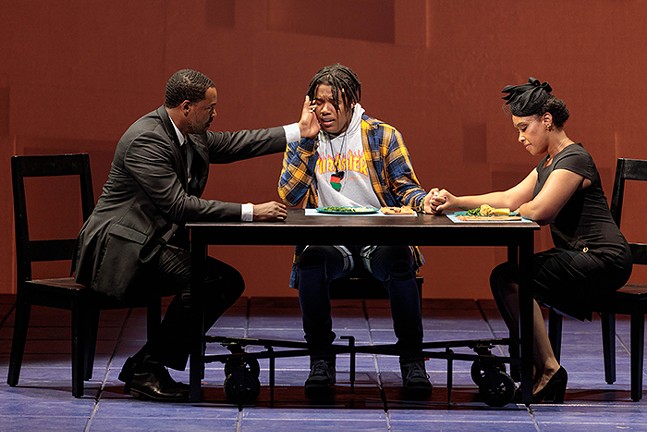 Courtesy of Pittsburgh Opera
Blue
The season will also see the world premiere of In a Grove, based on the same text that inspired filmmaker Akira Kurosawa's 1950 film Rashomon. Taken from the 1922 short story by Japanese author Ryūnosuke Akutagawa, the show examines the boundaries of truth and perception as several witnesses recount a violent encounter between a Samurai and his wife, and a bandit.

“We always strive to include a blend of classic favorites with new, contemporary pieces. This season is no exception," says Cox. "The Magic Flute is a perfect first post-pandemic opera – a perennial crowd-pleaser that’s fun for the whole family. Carmen is not just arguably the most popular opera of all time, but the show we were in the middle of rehearsing when the pandemic struck, so it will be a great joy to be able to resurrect it now that the pandemic is waning."

But, Cox adds, "opera is about much more than works written by white European males hundreds of years ago," emphasizing Pittsburgh Opera's commitment to present the "massive surge of new works being created, by a diverse group of composers, librettists, and directors."

Besides operas, the company will also present a number of other events, including galas and concerts, as well as costume ball in October and the return of the Pittsburgh Opera Fashion Show in April 2022.