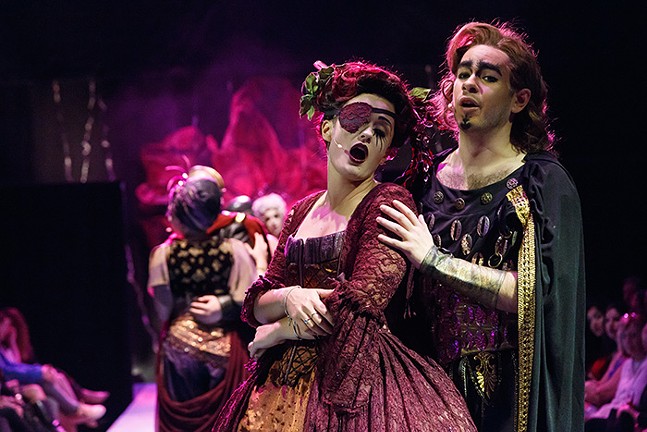 Photo: David Bachman Photography
The 2020 Pgh Opera Fashion Show: Roses and Thorns
In recent years, Pittsburgh has become a more fashion-forward city. Many designers across the region are providing Pittsburghers with unique hand-sewn or hand-painted wares. Shops and boutiques are bringing in big-name designers. A city that was once ridiculed for its fashion is having a moment.

One of the shop owners who has been bringing eclectic clothing into Pittsburgh for over 35 years is Richard Parsakian, owner of Shadyside’s Eons Fashion Antique, which specializes in vintage clothing and accessories. Now, he’s taking his clothing from the store to the runway after being approached by his friend Christopher Hahn, director of the Pittsburgh Opera, to collaborate on the company’s annual fashion show. Diva Dreams and Fashion Queens, returning to the Pittsburgh Opera’s Blitz Opera Factory space in the Strip District on Mon., April 4 after a year off due to the pandemic, will feature models all outfitted by Parsakian, with hair and makeup done by Studio Booth.

CP Photo: Jared Wickerham
Richard Parsakian
Diva Dreams and Fashion Queens aims to be a unique event showcasing the breadth of the Eons Fashion collection. Hahn says that the fashion show started about eight years ago, and came from an idea he had to blend the drama of opera and fashion together.

“It's something that I dreamed up because I'm always on the lookout for ways to bring new people to what we do and to explore the boundaries of what we do,” he says. “And there's something that's very dramatic about fashion, and the same can be said about theater costumes.”

Hahn says this year’s goal was to interweave opera fashion with vintage pieces from Eons to create a one-of-a-kind look. To add to the drama of the evening, the models will walk to operatic music.

Collaborating with Parsakian was a bit of a no-brainer, according to Hahn. Since Parsakian has so many connections in the theater community, the drag community, and the arts community, he says it wouldn’t be difficult to find models to walk the show and, of course, find clothes and accessories that wow.

“We talked about how to characterize this combination of the opera diva idea and the drag diva or contemporary fashion diva, or the popular culture diva,” says Hahn.

For Parsakian, this isn’t his first time organizing a show of such scale. He collaborated with The Andy Warhol Museum back in 2004 to put on a fashion show that was in conjunction with an exhibit on the Kennedy assassination. After being brought on by Hahn to provide the clothes for this year’s Opera Fashion Show, Parsakian got to work on combing through his extensive collection.

“My philosophy for working is that all of these models are friends of mine. They're dancers, actors, you know, people that are, they have a presence on stage,” says Parsakina. “I just went back and forth and found items that fit each person. Also, this is a very sort of nonbinary show. I blur the definition of what is clothing for males and females. I just sort of throw those definitions out.”

Parsakian says he’s positive that this show is on a scale that Pittsburgh has never seen before; instead of a fashion show, he calls it “fashion theater.” And while he says he hates the word “diverse,” he says he’s working with a wide variety of models who do showcase the diversity of what fashion can be.

He adds that he is passionate about matching certain models with designers who reflect their own history and story. With that in mind, he dressed one of his Black models in a Black designer named Willi Smith, who died of AIDS at the height of his career.

“So I essentially teach what I call ‘the children,’ that this is part of your history and part of your culture, and you're representing something on your body that goes beyond just fashion,” he says. 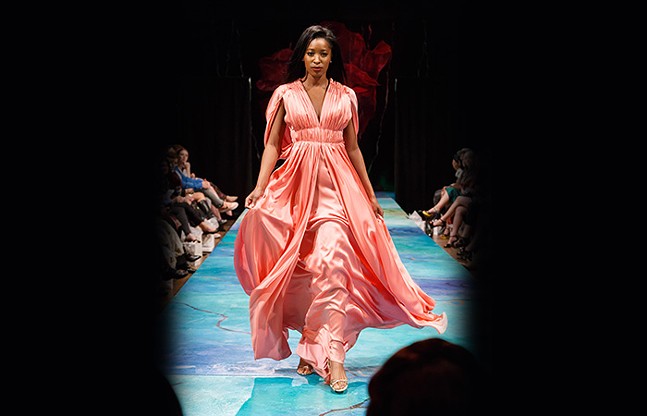 Photo: David Bachman Photography
The 2020 Pgh Opera Fashion Show: Roses and Thorns
Hahn says that he is most excited about the mix of people that this kind of event will draw. The Opera tends to attract long-time supporters, but he’s optimistic the fashion show element will bring in a younger, more eclectic crowd, especially with Parsakian at the helm. He also says that there is a high level of production value associated with the event, so this isn’t just a standard fashion show, it’s an experience.

Attendees of the event can expect to have their preconceived notions redefined, according to Hahn.

“Come ready to be surprised,” he says. “Come ready to explore boundaries, set assumptions aside, and to be amazed by what talented individuals brought together can cook up to entertain the community.”

Parsakian says a wide variety of designers will be showcased, including Thierry Mugler, who recently passed away, Alexander McQueen, Scott Barrie, and more, as well as a dress that was worn by actress Audrey Hepburn, and a shirt with a Keith Haring design on it.