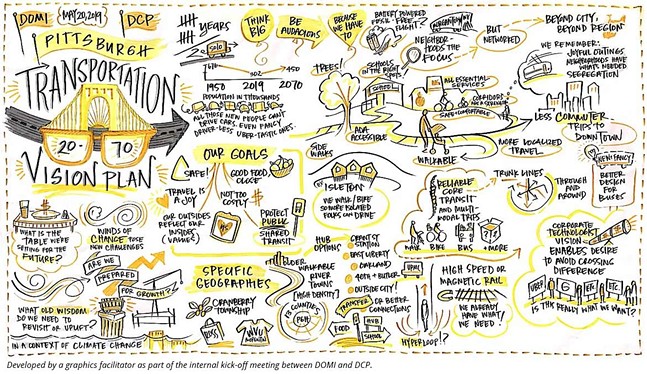 Image courtesy of city of Pittsburgh
A graphic developed for the 2070 Transportation Vision Plan
For decades, most of the transit-related investment in Pittsburgh was about helping people who live outside the city limits get in and out of Pittsburgh as fast as they could. Interstates 579 and 279 made it easier to commute into the northern suburbs, and as a result, the population growth in the region has been mostly concentrated in northern Allegheny County and southern Butler County, while the city of Pittsburgh has continued to lose population.

But today, Pittsburgh city officials are hoping to change that transportation dynamic with the launch of their 2070 Transportation Vision Plan. The goal of the plan, which is being run by Pittsburgh’s Department of Mobility and Infrastructure (DOMI), is to create a blueprint for how Pittsburgh can rebound and grow its population, while also maintaining equity in its transit and avoid problems like congestion from too much car traffic.

“As city residents, some multiple generations deep, many of us have experienced first hand the decades-long population decline brought on by changes in industry and economy,” reads the 2070 Transportation Vision Plan website. “In recent years, however, the city has been experiencing a resurgence fueled by the innovation, technology, research, education, and finance sectors.

“We believe growth is inevitable, and we must be ready for it so we can do so in a way that is equitable, preserves affordability, enables opportunities for existing, returning, and future residents, and meets our commitments to environmental improvement and resiliency. Our infrastructure network must be prepared for a time of growth.”

According to the plan, it will help identify a strategic two-year action agenda to direct DOMI’s activities and investments. The 2070 plan will also connect with other DOMI initiatives like the Pedestrian Safety Action Plan, the updates Bike Plan, and the Complete Streets Design Guidelines. DOMI says these three initiatives will be completed in the fall or winter of this year.

To complete the 2070 Transportation Vision Plan, DOMI wants input from Pittsburghers, and they don’t want people to think small when submitting ideas.

“This could be manifested in the form of restored streetcar transit, re-emphasis on bicycling and walking, gondolas (aerial trams) where once there were inclines, and water taxis, among others,” notes the plan.

But while DOMI wants big ideas from Pittsburghers, it should be noted that the current federal administration isn’t too keen on funneling a lot of money to urban transit projects.

Even funding for Pittsburgh's Bus Rapid Transit, which has gotten high praise from the federal government, could be waiting some time for its funding to get approved.

DOMI will also be tabling at a series of public events where people can engage with staff about the 2070 vision plan. There is also an interactive map and a short survey that people can fill out to participate.