The issue of patient overload facing hospitals in Pennsylvania is not just a matter of overwhelming nurses, it's bad for patients too.

Joanna Haneman, a nurse from Homestead, lays out this hypothetical: A nurse has multiple very needy patients, but can’t treat all of them at once. This forces the nurse to triage the situation. The nurse decides to handle the most pressing patient needs, like someone's breathing tube becomes dislodged. Then another patient's heart rate starts to spike. Those patients are taken care off, but those responsibilities have left a patient who has soiled themselves unattended to for 30 minutes.

“I could not even imagine how that would feel,” says Haneman.

Haneman joined nurses from across the Commonwealth in Harrisburg on Thu., May 8 to lobby for safer staffing ratios. Nurses set up a station in the capitol building to meet with state legislators and deliver letters detailing the stories of about 1,000 nurses who have first-hand experience with how these imbalances affect healthcare.

“One in 40 votes in Pennsylvania are registered nurses,” says Haneman. “We have a voice and they should start listening.”

Haneman and other nurses are advocating for Pennsylvania House Bill 867 and Senate Bill 450, which would create safe patient limits to ensure that nurses can deliver care properly. They're also advocating for nursing-home reforms to increase direct care hours up from the current 2.7 to 4.1 hours per day, and to direct Medicare increases directly to bedside care.

Without these changes, Haneman says a nursing career might start to become a less viable option for many. She trains new nurses and says that with increasing patient loads, many nurses are getting burned out quickly. Some start to look for new careers after just six months in the field.

“Seeing that breakdown of coworkers, that has bothered me,” says Haneman. “It’s like a burnout compassion fatigue.” 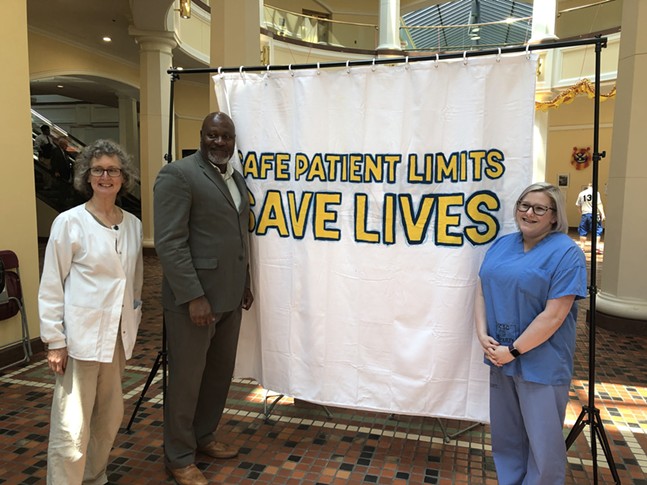 Photo: Nurses of Pennsylvania
Nurses posting with Pittsburgh state Rep. Jake Wheatley (center)
On the intensive care side, Haneman says nurses should have between one to two patients, but at times are given more. At the acute care side, she says a nurse should have four patients, but regularly have six, seven or more. Haneman even spoke to one nurse who had to deal with 10 patients at a time.

“When the patients are getting sicker and require more care, I can’t provide more care,” says Haneman. “Every patient is in their worst situation; everyone requires humane and compassionate care.”

For Haneman, this is particularly frustrating because she sees how profitable and economically thriving the health-care industry is. UPMC, for example, is the largest employer in Pennsylvania and had a 2018 operating revenue of $14 billion. The hospital giant is expanding, including three new facilities in the Pittsburgh area. Haneman feels that some of that revenue should go toward ensuring safer patient limits for nurses, which could actually save money since the imbalance leads to frequent staff turnover and the failure to get Medicaid reimbursements when patients rate their experiences at hospitals as unsatisfactory.

“I think some [state legislators] are more hesitant to support because they hear from hospital associations about increased costs of care,” says Haneman. “That’s understandable, but we are trying to show all the costs associated with short staffing.”

HD 867 and SB 450 have gathered the support form than 80 state legislators, including several Republicans and scores of Democrats, as well as Gov. Tom Wolf (D-York) and Lt. Gov. John Fetterman (D-Braddock). Neither bill has been placed in committee yet.