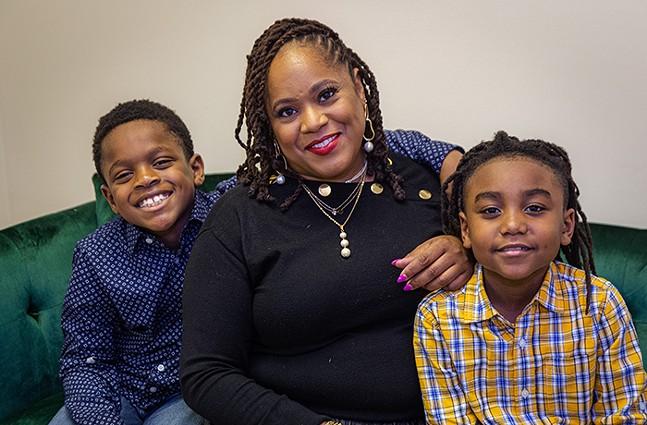 Photo: Courtesy of Leigh Frank
Alana Griffin and her two children
When She Thrives, a local nonprofit with a mission to help single mothers in the Pittsburgh region "move their families from poverty to prosperity through advocacy, education, personal, and professional development" is now helping six local women share their stories on an even larger scale.

Pittsburgh mothers Alana Griffin, Sonte Grier, Teona Hall, Nakeena Hayden, Danielle King, and Ashley Whigham will all be published in Scenes from a Single Mom, an anthology of stories collected from their time participating in When She Thrive's book project.

"The purpose of The Scenes From a Single Mom Book Project is not only to provide opportunities for single mothers to set and pursue new goals as authors and entrepreneurs but to redefine what success means for themselves and their families and to encourage and empower others to do the same," reads a press release for the book. "Moreover, the project fosters community and accountability because each story is necessary for the project to be complete, just as each woman and her family have something to contribute to the community."

The Scenes From A Single Mom program first began as a blog, but quickly grew in popularity. So far, 30 women have participated in the initiative, which not only gives women the opportunity to tell their stories, but also helps them on the path to a career as published authors if they wish to continue writing after the program ends.

The anthology and program are just one of the organization's ways of giving back to the region.

Tiffany Huff-Strothers first got the idea for When She Thrives in 2008 when she was living in North Carolina and feeling isolated from her community. As a result, she moved back to Pittsburgh in 2011 and found that many of the people in her circle were single mothers who needed help, and were also struggling with a lack of community. Thus, When She Thrives was born.

In addition to the Scenes From a Single Mom program, the organization also offers E.M.P.O.W.E.R., a healthy lifestyle initiative; Coffee & Clarity, a space for single mothers to talk and grow together; and, SOAR (Successfully Overcoming Adversity with Resilience), a 12-week program that equips single mothers with tools to advocate for themselves and their families.

The nonprofit's 2022 Scenes From a Single Mom anthology will be released during the group's annual luncheon on Sun., Aug. 14 at the Senator John Heinz History Center. The event will be hosted by local comedian Missy Moreno, and the keynote speaker is Dr. Diamonte Walker, a single mother from the Hill District, who the organization cites as a "role model for the mission and ideas that When She Thrives promotes," and the newly appointed executive director of the Pittsburgh Scholar House.

Five community members who are "impacting the community significantly," according to the press release, will also be rewarded at the event. They include Genafie McKnight, the founder and lead clinician of GSM Therapeutic and Consulting Services; Joelisa McDonald, the first female mayor of Rankin; Brandi Allen, head of STEAM after-school program Brandi's Care with Love; Jenea Edwards, a prevention specialist and behavior liaison for the University of Pittsburgh's MAPS program; and, Danielle King, a program and outreach coordinator at When She Thrives.When She Thrives Annual Luncheon Celebration. 12 p.m. Sun., Aug. 14. Heinz History Center, 1212 Smallman St., Strip District. whenshethrives.org/events.html