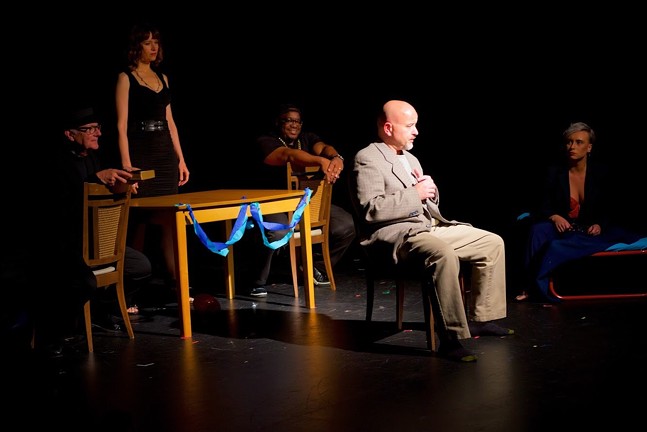 Photo: Brittany Creel
A scene from 2018 PNWF play “I Forgot To Worry” by Lawrence Paone.
The Mainstage productions of the Pittsburgh New Works Festival begins on Thu., Sept 6, but you don’t have to wait until then to see a curated selection of new and independent theater.

On Sun., Aug. 18 and Sun., Aug. 25, PNWF will present LabWorks, which features looser stage readings of new plays and provides a space for audiences to give feedback to playwrights.

“We want to get these plays on their feet,” says Andy Coleman, managing director of PNWF, “and most importantly provide a chance for the playwrights to hear their work ‘in the wild’ with characters being brought to life by the talented casts of local actors and a chance to hear and experience the audience reaction.”

The festival takes submissions from playwrights around the world and chooses 18 to be paired with and staged by local theater companies. Six of the plays are staged during LabWorks, which are pay-what-you-can. Coleman says the LabWorks productions can be fully staged plays, but they can also be more casual with actors reading from a script. After the readings, the audience participates in a discussion to provide feedback to the playwrights, actors, and director, who can also participate in the discussion.

This year’s LabWorks plays include The Ringmistress, a play by Denver playwright Sharon Farrell about an ill-fated circus family in Atlantic City; From a Phone Booth in Japan by Kalamazoo, Mich. playwright Gordon about, about a man calling his deceased mother; and Devotional Blackmail by Scott Gibson of Evergreen, Colo., about a woman who refuses to pee until she can talk to God about global warming.

“All 18 of the plays presented throughout the Festival are unique stories,” says Coleman, “and we always hope that both the LabWorks programs and the four Mainstage programs in September give audiences a wide range of theatrical experiences that are thought-provoking and engaging.”

For complete list of plays, dates, and locations, visit pittsburghnewworks.org