“This collection was very precious to them. It’s what they lived with.” 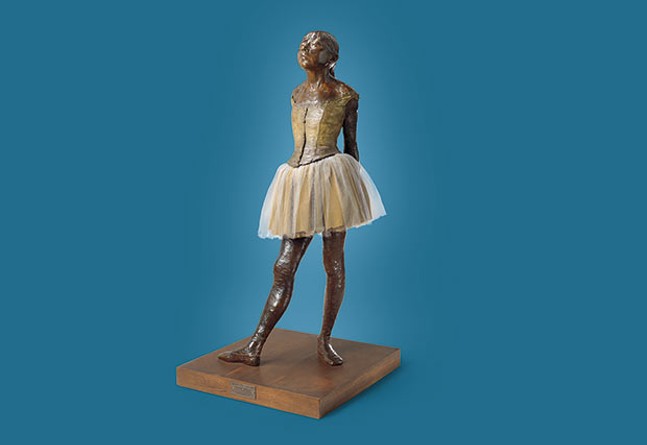 Pittsburgh’s native son, Paul Mellon, might not be as well remembered as his father, banking titan Andrew Mellon, but the contributions he and his wife, Rachel Lambert Mellon, made to the art community are widely recognized. Over the years, the pair donated more than 1000 works to the National Gallery of Art in Washington, D.C.

Last week, part of their collection came to Pittsburgh. The exhibit, Van Gogh, Monet, Degas: The Mellon Collection of French Art from the Virginia Museum of Fine Arts, will be on display at The Frick Museum through July 8.

“This collection was very precious to them,” says Frick Executive Director Robin Nicholson. “It’s what they lived with.”

Upon entering the exhibit, the landscapes portion of the collection is the first viewers see. On display here is Van Gogh’s “The Wheat Field behind St. Paul’s Hospital, St. Rémy.” Completed in 1889, the oil painting depicts the view from Van Gogh’s window in the hospital where he stayed to deal with his mental health issues.

In the next room, Degas’ “Little Dancer Aged Fourteen” takes center stage. While the sculpture, cast in bronze and complete with a cloth skirt tutu and satin hair ribbon, is Degas’ most famous, it caused some controversy in its day. Reaction to the piece varied widely but, according to Frick’s chief curator Sarah Hall, some people thought it was ugly.

Another of the pieces in the Frick exhibit is “Irises by a Pond,” a nearly floor-to-ceiling oil painting by Monet. Composed mostly of shades of green, yellow, brown and blue, pops of violet, springing from the canvas, draw the eye.

The works comprise an intimate domestic collection that reflects the tastes and even interests of its former owners. Mellon was a horse breeder, and there is a whole section of the exhibit dedicated to paintings of the animal.

The Virginia Museum of Fine Arts has housed the collection for decades, but the museum is currently undergoing renovations. After the collection’s first stop in Pittsburgh, it will make several more on a nearly two-year international tour before returning home.