Pittsburgh native Chelsea Baratz returns to town with her own band, and some ideas about what jazz can be | Music | Pittsburgh | Pittsburgh City Paper

Pittsburgh native Chelsea Baratz returns to town with her own band, and some ideas about what jazz can be

"When recording work comes, you take it. It's really a hustle and a grind." 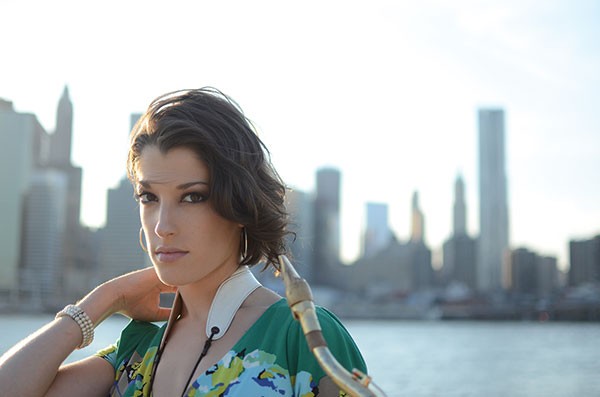 Chelsea Baratz grew up in Upper St. Clair, and as a teenager played with some of Pittsburgh's greats at the city's jazz venues in the early 2000s. The saxophonist lives in New York City now, where she is a composer and bandleader, in addition to being a session musician. She talked to CP via phone in advance of a return to town this weekend.

How did you come to play around town at such a young age?

I came up through Upper St. Clair's music program, which has some great teachers who would introduce me to the jazz scene in Pittsburgh — Glenn Whalen, a trombonist, who taught at Fort Couch [Middle School], and Frank Eisenreich, a trumpet player, who taught — still teaches — at Upper St. Clair High. Frank introduced me to Sean Jones; not personally, but he put me onto his playing. I had never really been into Downtown Pittsburgh to check out live jazz when I was 13 or 14, and he told me about this hot, young trumpet player who was playing at the Crawford Grill on Tuesdays, and it was Sean. I ended up going to my first jam session at the Crawford Grill when I was, I think, 13.

And I was just blown away. I met Alton Merrill that night, I met Sean, I met Roger Humphries, I met Dwayne Dolphin, Lou Stellute, Howie Alexander, James Johnson — all that night, when I was 13. And I played my first jam session. I'll never forget, standing up on that stage and thinking, "This is what I'm going to do for the rest of my life."

How did you end up in New York?

I went to Slippery Rock University first, studying saxophone performance. And I'd come down and sit in with Sean every Tuesday at [the now-closed Dowe's on Ninth]. And through Sean and his band, I got a lot more into composition, writing my own music, and Sean would let the young musicians come and rehearse with his band at [the Afro-American Music Institute], and perform them with him at Dowe's. So I decided in 2005 that I was going to apply to the New School, to transfer and move to New York.

How often do you come back to play in Pittsburgh?

I'd say about three to five times a year I come back. I've felt welcomed with open arms to always come back and play at James Street [Gastropub & Speakeasy]. I'll come back to town to do special events with other people or do a concert; then I'll book small performances around town. It takes work to set up in another city as a bandleader and book shows like that; it's not an effortless process. I love coming back to see my family — my blood family and my musical family.

How do you balance your work as a bandleader and composer with doing session work?

The way I compose, I compose by playing and recording, kind of like sculpture. I'm not sitting down with a pencil and paper; it's more with my instruments. So it's a very dynamic process for me, but when recording work comes, you take it and you do that. It's really a hustle and a grind; you do everything that comes at you. It'll balance itself out. It's pretty non-stop. As long as I'm performing and playing, though, I'm happy.

How many instruments do you play?

I've got the tenor saxophone, that's my main axe, and then soprano sax, that's another B-flat horn. Alto saxophone, flute, clarinet, then a little bit of drums and keys — enough to produce and record. Then I dabble with guitar a little.

Is that important as a bandleader, understanding so many different instruments?

Definitely. It's so much more clear and easy to run a rehearsal when you know how to talk their language. But also from a compositional standpoint, when you can understand the role that each musician and instrument plays in the music, you can record a clearer piece of music. Some of the songs I've written for my next album, I started writing from the drum set. Because I already heard the melodic elements; I thought, "Let me put this rhythm down."

Do you play non-jazz stuff? Do you like doing pop music, too?

Oh, yeah! Absolutely. That's a big passion of mine. Beyond that, it's a passion to incorporate it into my music. I don't want to play dinner music. When I first moved to New York, I started doing a lot of session work with Maurice Brown, and he brought me in to record with Aretha Franklin when I was 21. And I realized not just how musically gratifying the experience was, but how naturally gratifying it could be. And that got me focused on — what are you going to make a living doing? That helped get me into using recording as a means of composing as well.

Jazz gets a negative rap in certain lights, with certain people. Either it's the self-gratifying musician who's playing soulless, overly technical, boring music, or it's the jazz musicians playing the humdrum dinner music. That's not what I'm about. I started singing a couple years ago, so I'm incorporating that into my music, and my whole thing is strong melodies, infectious rhythms, different elements of different genres, performed by a live band where everybody's improvising. I'd like to think that's jazz.