"I am a firm believer in originality and being weird." 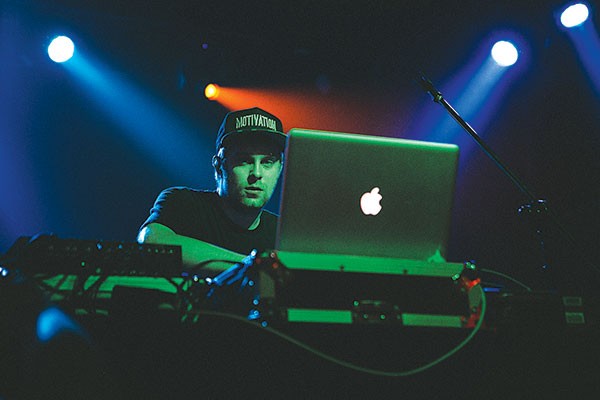 Electronic music is everywhere right now, and with composition easier than ever thanks to laptop production and nontraditional instrumentation, everyone is trying their hand — leaving listeners to sift through Soundcloud to find the gems. Gems, that is, like Buku's recent single "Booty Clapasaurus," a track whose twerk-inducing rhythms conceal a surprising amount of classical composition and creativity.

"It usually starts with something so minute, whether it be just a little lick like a lead, or a really tiny sample," says Buku, a.k.a. Pittsburgh native Robert Balotsky. "Anything I do just starts from one idea and goes from there."

Balotsky is only a year out of college, and two years into his music career. But he's already receiving recognition from big EDM producers like Diplo, who has predicted that Buku's single "Janky" was "kind of where dubstep is going." Diplo included the single on a mixtape for BBC Radio 1Xtra this past January.

Balotsky started off playing as Buku at raves and small venues like Shadow Lounge. With support from Obvious Productions, a crew dedicated to serving the Pittsburgh music and art scene, he landed several large gigs opening for Datsik and Rusko. His accelerated rise to fame among the many trying to do the same may stem from his tendency to do what he wants, not just replicate what others are doing.

"I try to ignore the trend, and obviously I have my ears in the street, listen to what's coming out, but I try to take in everything and nothing, if that makes sense," he says. "I try to take influence from stuff I listen to like throughout my whole musical career, spanning back to jam bands I played in [during] high school even, and taking into account modern trends. But I try not to play into any one specific thing that might be hot at the moment."

Still, anyone who has turned on the TV, attended a festival, or even tuned to a top-40 station in the past few years, knows that electronic dance music, specifically dubstep, has been seeping into mainstream. EDM has been around for decades, with new sub-genres catching like wildfire every year. Trap is no exception: It's a sub-genre born out of Southern hip hop and crunk, infused with elements of dubstep and house music.

Trap was first coined as slang for a place to deal drugs, but since its assimilation into everyday society (thanks to pushes from popular artists like Gucci Mane, T.I., Kanye West, and Diplo), the term has become representative of music that is dark, dirty, bassy, yet melodic. Typical trap composition includes kick drums (sometimes referred to as 808s because of the frequent use of the Roland TR-808 in production), hi-hat cymbal sounds, synthesizers and heavy bass, but few setups include instrumentation apart from a keyboard.

In Balotsky's studio, you'll find a full drum kit — and no keyboards. "I kind of just try to go to the studio and whatever happens, happens," he says. "I don't try to be like, ‘OK, well, this is going to be a big festival trap thing'; I just try to make my tune, make a song. And I like to think that all my influences over the years have kind of molded a sound that's different [from] people that may be just following trends."

Balotsky is well versed in music theory, thanks partly to his degree in music technology from Duquesne University. It's no surprise that his musical career began with percussion, and his first encounter with composition and production came about while he was in high school. He recorded himself on drums first, but soon began to experiment with electronic and ambient sounds, taking inspiration from progressive rock band Umphrey's McGee and electronic-music duo Boards of Canada.

"I am a firm believer in originality and being weird and whatnot," Balotsky says. "I encourage people to be themselves and be original, and whatever you think is right is probably right."

James Gyre, an Obvious crew member, has seen the process in action.

"We were at an after-party," he recalls, "just fucking around in the kitchen, banging on pots and pans. And even in that context, Rob made a point to explore the material as a percussionist, when it would have been easy to just be an animal. Found sound isn't really his thing, but he has it in him. He's open to finding unique sounds that turn him on."

While Buku has built a name for himself in the trap music scene, his motivation was never to get big for the sake of fame. Instead, he relies on his intuition, taste and compositional skills. A song isn't finished to him until he knows it inside and out, has heard it from every part of the room in the studio, listened through computer speakers, and in the car — just to make sure everything flows to his standard.

Even songs like "Booty Clapasarus" — whose title might suggest a silly throwaway — have compositional value, melody and balance, reflecting Buku's varied inspirational sources and the killer crew backing him up. And while trap is blowing up this year, next year, it's unlikely Buku will disappear when it ceases to be trendy.

His influence already runs deeper than even his fan base might realize. "I cherish the track he'll never release, things he's given me just to sample from," says Chris Mr. Owl, another Obvious crew member close with Buku.

Buku will return to his hometown this Friday to headline what's billed as the biggest UV glow party of the year: Light Up the Trap, at the Rex Theater. He says he couldn't be more excited.

"I just love Pittsburgh and a sort of pride that comes from Pittsburgh," Balotsky says. "The way I got to this point was working through the Pittsburgh electronic scene. I feel that if you went to just about anyone in the electronic scene, I've probably met them. It's another point of pride, because I've worked through the scene, and each of them has supported me as well. It has to do with me being grateful for those people, too."