Pittsburgh musicians come together for an album of political protest songs, with proceeds going to the ACLU | Music | Pittsburgh | Pittsburgh City Paper

Pittsburgh musicians come together for an album of political protest songs, with proceeds going to the ACLU 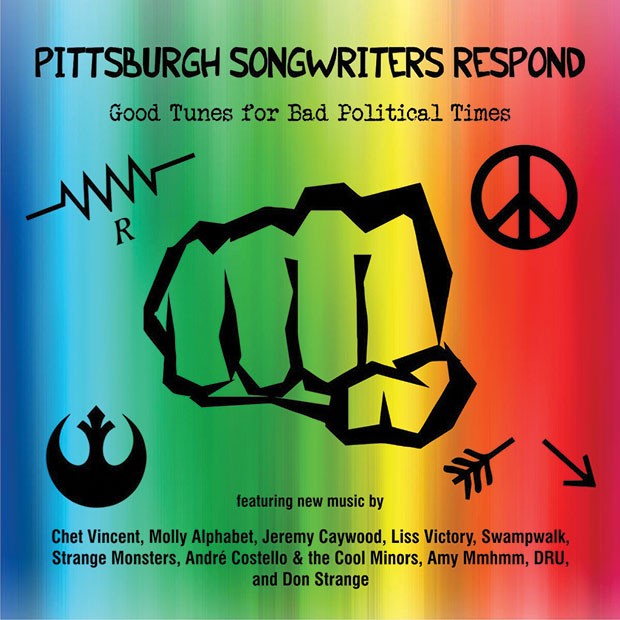 As President Trump’s administration took office, a cross-section of local acts took to the studio to document their feelings about the new political landscape. The resulting 12 tracks (counting two bonus songs) feature pared-down, mostly acoustic songs, ranging from poetic to political to personal. Some songs are delivered with blunt emotion, some with tongue wedged in cheek. The proceeds from the CD will benefit the American Civil Liberties Union.

Good Tunes for Bad Political Times was assembled by Liss Victory (from Victory at the Crossroads) and Don Strange (Strange Monsters), who both contribute songs here — the latter as both a solo act and with his band. While angry politics don’t always translate into strong material, more happens on the Good Tunes than musical fist-waving. The gloves come off with DRU’s “The Embarrassment (Shut Up Donnie).” Prior to that, Jeremy Caywood opens the record with a plea for understanding (“Raise You Up”) and Molly Alphabet waxes metaphorically in “Crocodile Tears.”

Swampwalk’s “Indoctrinated” diverges most in terms of sound, with stark synth lines and haunting vocals. Strange offers the best couplet of the set: “We got a lot of them Darth Vaders / sure could use some more of them Ruth Baders.”

Chet Vincent’s “5th of July,” proffers a real call to arms to those who think a mere wave of the flag solves everything. After Independence Day is over and the fireworks and picnics are done, the moment of truth comes. July 5th, he says, is “the day we decide if the banner yet waves or we’re living a lie.” In other words, we must take to action if things are going to change. Power to the people.

You can download Good Tunes for Bad Political Times at pghsongwriters.bandcamp.com/releases.