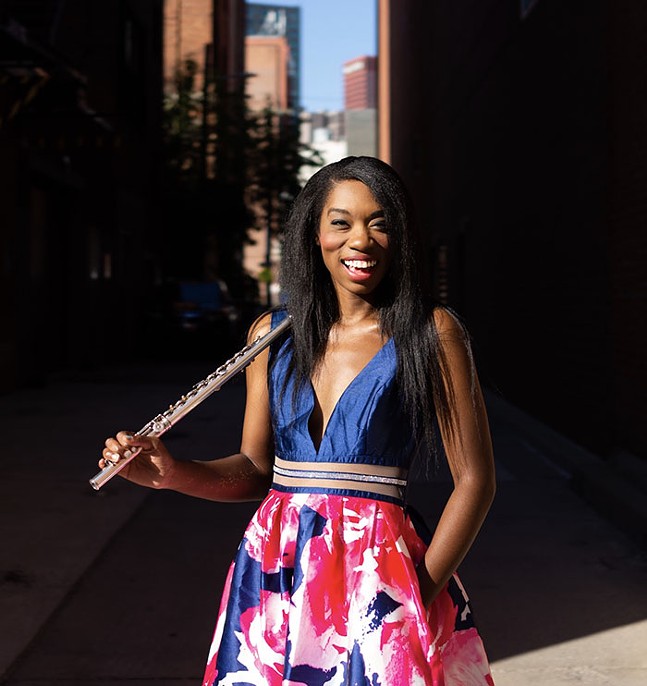 Photo: Courtesy of Dr. Brittany Trotter
Dr. Brittany Trotter
For Black musicians in Pittsburgh, there are often hoops to jump through to get the recognition, funding, and support that comes more easily to their white counterparts. On top of the already fraught world of underfunded arts programs, Black artists say they have to deal with bias and being pigeonholed as one kind of performer.

“Because you’re Black, people think you only do jazz or you only do gospel, which is not the case. There are a plethora of amazing classical Black musicians out there,” says Dr. Brittany Trotter, a renowned flutist who lives in Pittsburgh.

“People only pay attention to the fact that I do hip hop, or people will only put me in roles that are for Black singers or made for Black characters,” agrees Pittsburgh musician Lyn Starr. “You’re either looked at through one lens or not looked at at all.”

Both Trotter and Starr are looking to change that narrative as the recipients of the inaugural UniSound Black Teaching Artist-in-Residency Program, an opportunity that seeks to bring music education to Pittsburgh students while supporting teaching artists.

The UniSound BTAR program is a seven-month-long residency that will culminate with a project of the residents’ choosing, be it a workshop, recital, or a lecture. Each musician will receive $1,000 per month and will also be given the opportunity to network and develop their artistic endeavors beyond the residency. UniSound, a Pittsburgh-based coalition of more than 35 organizations specializing in youth programming, created the residency to boost representation of Black people in the teaching arts.

Starr started singing at a young age and those around him quickly realized he had a talent. “I just kept telling my mom I had a good voice and it was like, ‘Alright, well, we’ll see about that,’” says Starr, who started his music education at the Afro American Music Institute in Homewood. He later attended Rogers CAPA and went on to study music in college at Seton Hill University.

He founded the record label High Five Productions when he was just 17 years old as a way to create a platform for himself and his friends who were also musicians. “You tell someone you’re a rapper, and, you know, they’re not just going to put you in their show,” he says about the struggle to be taken seriously as a young artist. Since then, however, he has had a prolific career in music. From teaching voice to story-writing, and from hip hop to opera, he has pursued a passion that expands beyond genre.

This residency presents an opportunity to give back for both artists, who cite early experiences with teachers and artists in their field as inspiration. While classes like mathematics and English are seen as the foundation of an educational experience, they say music and the arts often get overlooked and excluded from the curriculum. For Trotter, music is a way to connect.

“[Music] really brought a purpose to my youth life. I was very introverted. I didn’t have a lot of friends, so music impacted me because it was one of the first things that I was really, really good at and I felt accepted at,” she says. “I think music is definitely important, especially in our culture, to just express ourselves. Even with all of the traumatic events that have been happening in the pandemic, it's nice to have that release and that outlet to be creative, to show our talent, and our gifts.”

Trotter started playing the violin in the fourth grade, as it was passed down to her from her sister. By the sixth grade, she had moved on to the flute and fell in love. One of the defining moments of her music education was seeing the chamber group Imani Winds, a collective of mostly Latino and Black musicians.

Photo: Sara Bader
Lyn Starr
“I was in an all-state band in Mississippi at the time. To be in an all-state band, you get to travel a lot. That was one of the big eye-opening things because it allowed me to travel outside the state of Mississippi,” she says. “I got to go to these amazing places like Chicago and realized that I wanted to make this my career.”

Trotter has traveled throughout the U.S. as a musician and soloist and currently serves as faculty at Dickinson College, West Virginia Wesleyan College, and Duquesne University. Her style of flute playing spans from classical to eclectic, and she often uploads videos of her performances to her YouTube channel. She and a collective of other musicians have started the Umoja Flute Institute for flutists of African descent, a project that is now accepting donations.

Starr recently released a new music project, Tierra, which is available for purchase and on streaming platforms. It is his first foray back into making R&B music.

Both Trotter and Starr are looking forward to the time and resources this residency will bring to them, as well as the ability to work with youth and have a positive effect on their lives. “Music is not just for a specific kind of student, music is for every student. As teaching artists, we have to recognize that some students do not have the same opportunities,” Trotter says. “I'm very thankful that my teachers found opportunities for me and I was able to gain from them, but there's so many others that don't have that. So it's very important for me as part of being at the table that we recognize there is a huge inequality to music education and how we can rectify that problem.”
UniSound unisound.us
Brittany Trotter brittanytrotterflute.com
Lyn Starr instagram.com/stoasta and highfivemusic.co