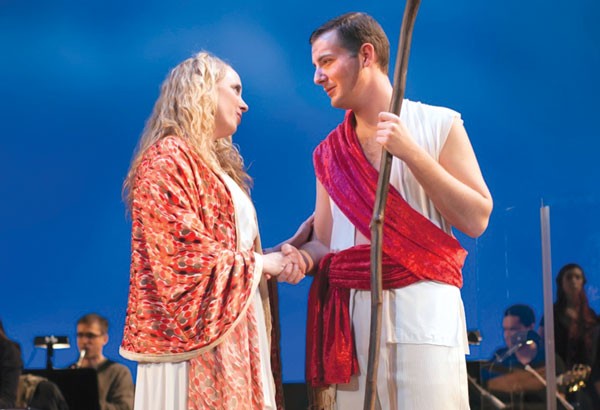 Stephen Schwartz, the composer and lyricist who struck gold with Wicked, is particularly fond of his most personal project — Children of Eden. Pittsburgh Musical Theater's new production of Eden is a mixed bag of striking performances, trite production choices and undeniably spectacular music.

Children of Eden draws its subject directly from the Book of Genesis. It begins with the Creation and works its way through Noah and the flood. But like any narrative where everyone knows the ending, the story isn't the reason you're there. Schwartz fashions a compelling thematic structure out of deliberate repetitions which the production communicated deftly.

Noah has a song in the second act called "Hardest Part of Love," that sums up the show's thesis in a couple of lines — "But you cannot close the acorn / once the oak begins to grow / and you cannot close your heart / to what it fears and needs to know / that the hardest part of love / is letting go." Children of Eden is a show about parenthood and the impossible idea that every child will eventually leave home and become a parent in their own time, a cycle that never ends. The production smartly allows the same performers to play two roles — Adam returns in the second act as Noah — making the message abundantly clear.

As the Father of all things, Brady Patsy holds the ambitious show together with a rich baritone. We can be reasonably thankful that he decided to create Eve, played by Emily Lynne Miller, who shines in "The Spark of Creation" and a startling gospel number, "Ain't It Good." The second act forms a marvelous self-contained account of Noah's flood, lifted by a magnetic performance from Liz Kasun as Yonah, a stowaway on the ark.

The production itself is less laudable. Director Ken Gargaro manages to harness the energy of his enormous cast with Lion King-like impressionism. Unfortunately, someone found it necessary to place an obnoxious screen behind the stage that does nothing but show didactic greeting-card images and vague emotional signifiers, rather than trusting the huge ensemble to do the work. On the other hand, the orchestra, led by music director Brent Alexander, performs with reliable grace.