With jokes in spades, Avenue Q encourages viewers not to take life too seriously 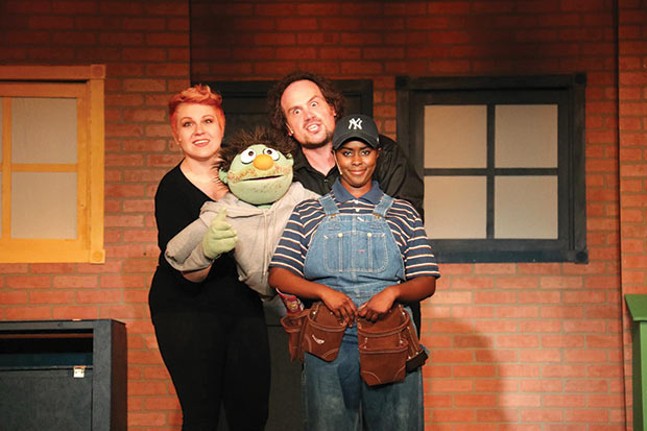 Photo courtesy of Melissa Wallace
On stage with Avenue Q

Avenue Q debuted on Broadway in 2003, four years before the great recession hit and left many struggling to find work. But its prescient plot tells a story that has become all too familiar in the last decade — maybe it always was.

The musical centers on bright-eyed college grad Princeton who arrives in “the big city” with big dreams to match. But just like so many college grads, Princeton finds that his degree and ambition aren’t enough to pay the rent. Before the first day at his new job, he gets laid off.

This month, Pittsburgh Musical Theater brings this Tony Award-winning musical to the Gargaro Theater stage as part of its Rockin’ West End Series. Directed by Stephen Santa, the production is a fitting close to PMT’s 2017-2018 season, with a cast that rakes in laugh after laugh with impeccable timing.

Matthew Augustyniak shines as Princeton, who, while low on funds, quickly finds himself high on friends. Soon after moving into his new apartment and getting the bad news about his job, he meets the motley crew of tenants in the building: Kate Monster, a kindergarten teaching assistant; Brian, an aspiring comedian; Christmas Eve, Brian's Japanese fiancée; Rod, a closeted Republican banker; Nicky, Rod's slacker roommate; and Gary Coleman, (yes that Gary Coleman) the building's superintendent.

There’s also Trekkie Monster, a recluse playing the role of grumpy monster next door. And though Trekkie’s nature means he’s often relegated to interacting with his neighbors from an upstairs window, actor Joe York’s temerity makes him hard to miss.

With an ensemble cast of this size, it’s important that each character carry their weight and PMT’s players certainly do. There’s rarely a missed note throughout, a challenging feat for actors tasked with singing in such cartoonish voices.

Despite the humorous nature of the show, the characters take on many important subjects: sexual preference in the number “If You Were Gay” and racism in, well, “Everyone’s a Little Bit Racist.” There’s plenty to find offensive — Christmas Eve’s Japanese accent is often played for laughs — but with jokes in spades, Avenue Q encourages viewers not to take life too seriously.

Like many musicals, Avenue Q ends on an upbeat note. Lessons are learned, dreams come true, but not everything is wrapped up in a neat bow. The show’s final number “For Now” emphasizes that both struggle and joy are temporary. It’s up to the each of us to make the best of them.