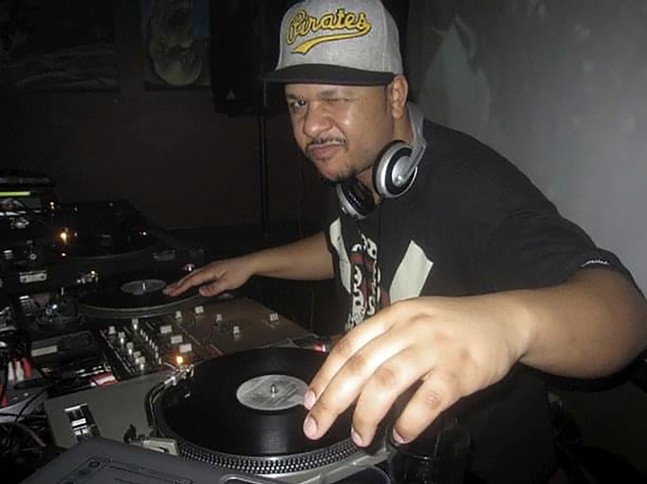 Photo: Christie Berger
Reese "DJ Vex" Brown at New Amsterdam
For local music fans, the name Reese Brown may not elicit much of a response. But his persona DJ Vex would conjure images of nights at the former East Liberty clubs Shadow Lounge and AVA, or crowds at AFROHEAT!, a popular Afrobeat dance party he curated with Pittsburgh DJ SMI. Brown also worked as a producer, further cementing himself in the scene.

Brown died on Feb. 25, 2021 in Phoenix, Ariz. A GoFundMe raising money for his family, including his two young sons, and funeral costs says he was “the victim of a motor vehicle crash that struck him” while he was on a crosswalk.

Since then, figures in the Pittsburgh music scene have reacted to his death with memories of the beloved artist and collaborator who brought so much to their creative and personal lives.

SMI, real name Tim Guthrie, traces his friendship with Brown back to around 2005 and credits him for being an inspiration to many in the scene.

“I think he set the bar high for any other DJs that ever heard him play,” says Guthrie, who also co-owned Shadow and AVA. “That was a constant for about a decade in the Pittsburgh music scene. I think that impact is immeasurable as it pushed so many to be more creative in their sets for so long.”

Born in Pittsburgh on July 8, 1979, Brown's influence reached beyond his home city. He moved to Virginia during high school where he co-founded the DJ/producer crew Better Beat Bureau. He returned to Pittsburgh in the mid-2000s and established DJ residencies and promoted events along with Blane “Geeman” Britt, primarily at the Shadow Lounge/AVA, where they often booked DJs and producers from cities like New York City and Detroit.

Guthrie adds that while Brown was “a laid back dude,” he also challenged him.

“We didn't always agree on things creatively but we did most of the time and respected each other’s natural talents and love of the music,” says Guthrie, who admits that he can be stubborn in the studio. “I was just a huge fan of his production and he was super generous with his willingness to collaborate on things, but that’s because it all just happened naturally by hanging out as friends.”

Their easy chemistry translated into AFROHEAT!, an event dedicated to the music of the African diaspora that regularly packed dance floors at local venues like Spirit Lounge and Round Corner Cantina.

“It was an honor to grow that party with him and show that there was a hunger for this music in Pittsburgh and beyond,” says Guthrie. “That wasn't easy in a city like this but that never stopped him from moving forward with an idea.”

Vex relocated to Phoenix in 2015, where he created a satellite party, while Guthrie continued hosting AFROHEAT! in Pittsburgh. The two reunited at Spirit in July 2019 to celebrate the event’s five-year anniversary.

J. Malls remembers seeing Brown at Shadow Lounge/AVA. He also recalls his days working at Jerry’s Records when Brown would come in to look through the stacks of records.

“I feel like a lot of people are going to tell you the same things about Vex. How nice of a guy he was. How talented and creative he was. Which is all true. One of the most easy-going and peaceful people,” says Malls.

Brown also produced a portion of the tracks on Guthrie’s album Every Minute Counts, released under his name SMILO. Besides Guthrie, Brown produced music for a variety of other local acts, including Beedie and the late Mac Miller, as well as longtime collaborator Bernard “Nardo Says” Eure, who also goes by Bobby Blunt and Blacc Bobby.

It was with Nardo Says that Brown completed some of his final work by producing the track “I.B.T.B.U.” on the album Y.D.A.I.A. The album also marks the first and only time Brown illustrated album cover art.

In a sad twist, Brown died the day before Y.D.A.I.A. was released on Bandcamp.

Eure says he met Brown through a mutual friend in Virginia 22 years ago, and they connected through their shared love of music.

"Reese knew how to rock a party," says Eure. "Didn't matter where. He brought people together when he was spinning."

He calls Brown a “creative soul” and believes he excelled in every area he pursued.

“I can't even describe his impact because it's so huge,” says Eure. “He touched a lot of people in a short period of time either through his art, music, or friendship. I was blessed to see the journey with him.”

Currently, fans can pre-order vinyl copies of Y.D.A.I.A. that feature Brown’s art on the cover. All proceeds from the vinyl sales will be donated to Brown’s family. The album, released through Diggers Factory, will go out for delivery in July 2021.

In honor of Brown’s memory, Malls and others are encouraging people to donate to his family’s GoFundMe. Guthrie says he also plans to celebrate Brown’s birthday by hosting another AFROHEAT! at Casa Brasil, a Highland Park restaurant that he co-owns.

J. Malls also wants those who are not as familiar with Brown to visit his discography, which stretches from 2003 to 2021.

“He was dedicated to the music and the culture and sharing the music and connecting with people in that manner,” says Malls. “I think that's inspirational and we need to keep Vex in the conversation and keep his music in rotation.”

Eure says that he hopes people remember Brown as a man whose work covered various media and cities.

“I would like people to remember him as the humble talented visionary he was,” says Eure. “His art was featured in galleries. He's rocked many parties and produced many tracks. He truly was a man of many talents and he was just getting started.”