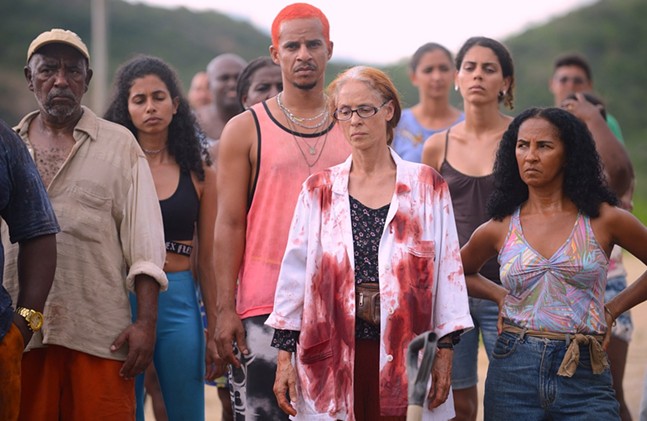 Photo: Kino Lorber/Victor Jucá
Bacurau is now streaming through the Tull Family Theater, and will soon be available through Row House Cinema.

Updated Thu., March 26:
The Parkway Theater in McKees Rocks is offering streaming versions of its new release films, including the currently available Phoenix, Oregon, the Swedish-Georgian drama And Then We Danced (available Fri., March 27), and the upcoming documentary Once Were Brothers: Robbie Robertson and The Band. Half all ticket sales will go directly to supporting Parkway Theater.
Original story, published March 24:
As businesses shut down in response to the COVID-19 outbreak, people have still found ways to support their favorite restaurants and shops, even if they can't patronize them in person. But what about movie theaters, particularly ones operating outside the multiplex system?

In Pittsburgh, independent theaters are offering their own versions of streaming platforms to make sure scheduled films reach isolated audiences. On March 21, Row House Cinema launched its online portal with the local premieres of two new independent films, the Academy Award-nominated Corpus Christi and Chinese crime thriller The Wild Goose Lake (both will continue streaming through Thu., March 26). Other online events include an exclusive showing of the documentary Fantastic Fungi and a screening run for the Brazilian film Bacurau (available Fri., March 27-Thu., April 2).

A press release promises that each Friday, two new films will be released on the website and will either be a Pittsburgh Premiere film, or a classic in “true Row House form.” Ticket prices will range from $8-12 with half of the proceeds going to help Row House through its temporary closure.

“We are doing this to survive, so we can reopen,” says Row House owner Brian Mendelssohn. “What will be interesting is when we do get to reopen, how things are going to change for us after launching this new service.”

The Tull Family Theater in Sewickley is offering virtual screenings and working with various partners to give film fans more options. Users can pay to stream Tull's featured movies, or find links for free access to the live stream of the Ann Arbor Film Festival and tons of interactive materials through the Bryn Mawr Film Institute. There are also links to a free one-month trial for Music Box Direct (use promo code TFT) and a free three-month trial for MUBI.

The offerings are especially crucial given that Tull, like other establishments, has no idea how long the theater will have to remain closed.

“It is an effort to stay engaged with our audience and continue adding value to their cultural life,” says Tull executive director Carolina Pais-Barreto Thor. Tull also launched a Weekly Update of submitted film recommendations as an “opportunity to stay connected and learn what people watch to find comfort and relieve anxiety.”

Besides staying relevant, Thor says streaming provides some economic intake during the shutdown. She adds that the theater has had to cut back on operations-related expenses, and is now unable to offer hours to part-time box office employees, many of whom are high school students. The theater's four full-time salaried employees “continue to work from home on the current offerings.”

For the Pittsburgh-based production company Animal, the shutdown has provided an opportunity to introduce its independent films to audiences with time on their hands. Currently, the company is streaming its documentary, Almost Holy, for free on Vimeo, with a new film set to release each week down the line.

“We here at Animal want everyone to stay occupied and safe during quarantine,” Animal posted on Twitter as a reason for the move.
The overall industry is now in crisis-mode as movie theaters remain closed and distributors push back release dates. On March 18, the National Association of Theatre Owners (NATO), which represents more than 33,000 movie screens in all 50 states as well as thousands internationally, called on congress to provide immediate relief to the country's film industry and its estimated 150,000 employees. A press release says NATO also authorized $1 million from its reserve to “aid movie theater employees who are out of work due to movie theater closures stemming from the COVID-19 pandemic.”

Streaming also offers a way to screen films now that major festivals, including SXSW and Tribeca, are canceled. The shutdown has even prompted the Academy Awards to rethink its stance on requiring theatrical distribution for nominations, as many films may never see the big screen.

But even at a local level, Thor and Mendelssohn both wonder how being forced to go online will alter the film landscape and affect how theaters operate going forward. Mendelssohn believes that, even as many participating distributors “have promised they will not do this after the theaters reopen,” there is “no way the industry will remain the same.”

“This has been very challenging because this [modus operandi] is new for everyone, including film distributors,” says Thor.